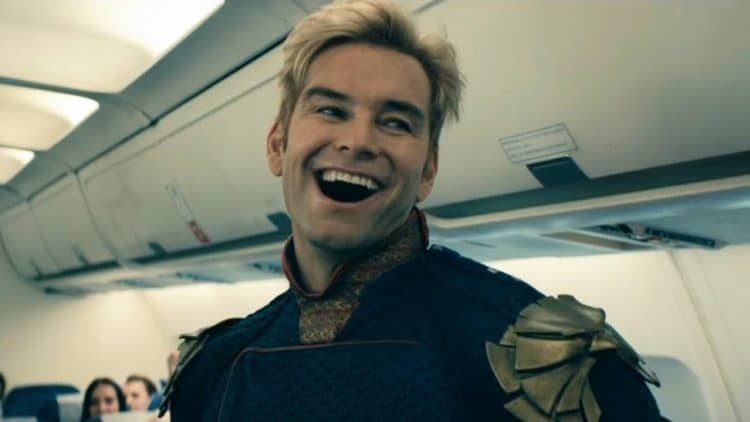 This theory for The Boys season 2 is bound to be something that a lot of people have already thought about, but with only a short time until the second season is here it’s still important to reiterate just what it was. Remember at the end of season 1 when Homelander, jerk and all-around psycho that he is, showed Butcher that his wife Becca, was still alive and that she was raising Homelander’s son? Just think about what that will have done to Butcher’s mindset and what he might be thinking of doing in the second season and the theory of Homelander’s son comes into focus a little more. Homelander is Butcher’s sworn enemy after all, and Becca was Butcher’s wife but is now raising Homelander, and her, son, who has the same powers as his father as one could guess. But unlike Homelander, this kid is being raised in a home with at least one stable parent, and might already have surpassed his father in learning what it’s like to be a real human being. Plus, it’s also likely that Becca will have a least tried to show him how and when to utilize his powers since otherwise, it’s very likely that a child born with the same powers as Homelander would cause a great deal of destruction before he was brought under control.

But apart from all this, the fact that Homelander is insanely insecure is thought to be a big part of the theory leading into season 2, and this will factor into the idea that he’ll covet Becca and attempt to get her to take on the role that Stillwell filled for Homelander in the first season, at least until he killed her. This might spell bad news for Butcher, not to mention that he and the Boys are already in the hot seat as they’ve been labeled as fugitives. But having to deal with the fact that his wife is alive and that she’s now raising the son of his sworn enemy is going to be even worse since it’s already been established that Butcher isn’t about to let any of the Seven forget that he’s coming after them, and it’s also been made clear that Homelander is not a stable human being since his upbringing wasn’t exactly the greatest and dealing with him in a rational manner is about as easy as keeping a house of cards from tumbling in a windstorm. The thought that he’ll look to make Becca more of a stand-in for Stillwell now that she’s gone could be something that will only heat up the hatred between Homelander and Butcher since both of them have made it clear just who they are as of season one.

The Boys is definitely a different type of hero show and it does answer that question that a lot of nerds, self-professed, might have been wondering since the whole idea of a super being impregnating a woman is kind of troubling given the idea that during conception a being that’s even slightly less powerful than Superman might crush a normal woman in his throes of passion. But of course, the existence of this young kid gives evidence that such a thing didn’t happen since Becca is alive and well and perhaps not totally stable from an emotional perspective, but it’s likely that she’ll still do anything for her son, even if he is Homelander’s. Kids tend to make situations like this so insanely difficult that one might want to ask why anyone would ever have them, but that question is both ridiculous as well as troubling since the idea of having kids is to enrich one’s life and to hope for a future that can be embraced by the child at some point so that they can help continue the species and whatever legacy they’ve been given. For Homelander though, a kid would appear to be leverage over Becca so that he has someone in his life that he can covet, someone that he can use to soothe whatever needs he has in order to make himself feel better. It’s manipulation in other words, as the theory being put forth goes, something that Homelander will use in an attempt to please himself and in some way utilize to give meaning to his own life.

Season 2 is already shaping up to be something insane and intense since the characters that are left are coming together in a way that suggests that what we saw in season 1 was only the warm-up and that what we’ll see next is going to be utter chaos by comparison. Of course, that’s what the fans want, so it’s what they’re going to get, and the saga of some of the most messed-up heroes are going to continue for now until we see things reach a crescendo. Just imagine what that’s going to be like.