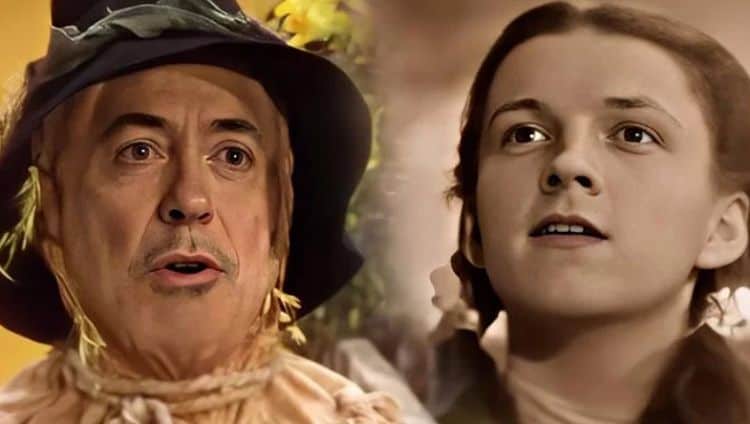 It definitely feels fair to say that Deepfake has gone off the deep end with this one since the Avengers of Oz is kind of a nightmarish-looking trip into a world that would be every bit as insane as one might think. As the folks at MovieWeb are saying it might look like an interesting story idea but then again it might scare the living hell out of some people since it looks a little TOO real for comfort in some cases. Poor Tom Holland just appears to have a face that Deepfake tends to love and even Chris Pratt and Chris Hemsworth were allowed to get in on this one while the late Stan Lee even had a cameo, as did Thanos. Imagine the mad titan being the face that showed up in Oz’s contraption, the Cowardly Lion might have gone screeching out of the throne room even quicker at that point. Some people might feel the need to cringe at these videos and some might feel the need to just laugh uproariously since they are kind of funny and an Avengers of Oz movie would kind of interesting as a crossover at least, since there’s no telling just how powerful some of the characters in the movie really are. Of course the story of Oz wasn’t really written with power in mind unless one is talking about the witches, since the actual wizard is a huckster that has no more power of his own than any other human.

Strangely enough the faces fit in this parody since somehow Tom Holland and Robert Downey Jr. just appear to go with about anything that they’re put into, largely because Deepfake is getting better and better at what they’re doing and likely because people are also getting used to seeing them. Holland and RDJ have been considered a duo since Spider-Man: Homecoming came out, and despite however unlikely it was they remained that way throughout the Infinity Saga when they were together. Pratt and Hemsworth being added on in this video was just funny since both of them are hilarious in their own right and manage to add something to the whole thing as well. It’s safe to say, apparently, that as long as there are movies to digitally insert different faces into, Deepfake is likely going to keep do this to get a good laugh or chuckle out of someone as CSO Online might agree, at least until people really start wondering if there’s a deeper point to it. After all, CGI is expanding every day and the applications that it brings are bound to be used for something that people might have an issue with at some point.

Replacing actors is of course one fear, as taking a digital image of an actor and placing it over someone else’s face is bound to cause a lot of concern when it’s being utilized for something other than de-aging someone in a movie or bringing them back for a few moments when the actor has been dead and gone for years. The moral implication of bringing back deceased actors is huge since not only is it going against the nature of the business, it’s profiting off of people that aren’t able to say anything for or against it. In other words there’s no chance to consent and therefore there’s no way that a person can say whether or not they’re being given a proper representation. Plus, one can only imagine how this would divide the fans and what they’re average reaction might be. A lot of people have already expressed their distaste over the mere idea, though some are adamant about bringing back the old and great actors. The only problem is this: they wouldn’t be bringing back the old, great actors. Deepfake and anyone that tried to copy them or replicate their technology could bring back the likeness of an individual as Creative Bloq pointed out, but nothing else. Programs such as Deepfake could possibly bring back the faces of the old actors and even their bodies, but they couldn’t make them act in the same manner or display the same skill set that people grew used to. In other words, this program can make people look like anyone and plant a face on anyone’s body, but they can’t turn them into a classic and well-respected actor, so that part would remain.

People are actually getting a bit nervous as Deepfake and AI programs are making headway these days, but at this point a lot of them are still firmly under the control the humans that are running them, so there’s less to worry about than a lot of folks might realize. But it is possible that this program could be used in a few ways that would be less than beneficial. Thankfully though the idea is more laughs than anything.