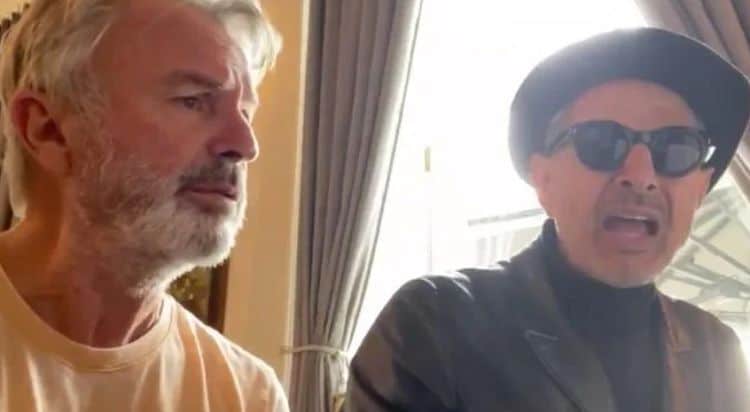 Obviously the guys find something to do with their downtime when they have it, but otherwise, it’s going to be interesting to see Sam Neill and Jeff Goldblum back for Jurassic World 3, especially since Dr. Alan Grant obviously wanted nothing more to do with dinosaurs after the third Jurassic Park. Heck, he didn’t want anything to do with them during the third movie either. But it’s a little harder to avoid them when they’ve been allowed to make their way to the mainland, which is one of the worst ideas that could have possibly come within the Jurassic Park universe but will no doubt be insanely popular once the movie is released. In the meantime, it would appear that Sam and Jeff found a nearby piano and started their own little duet just to pass the time. While both men might actually have decent singing voices this really wasn’t the best display of that since they were just playing around. But thankfully both men are great actors as they’ve proven through the years and it’s believed that they’ll do quite well when it comes to the next Jurassic World, which is lining up to have quite the cast since there are a few people coming back from the past few movies. Obviously there are some characters we won’t be seeing, but from the look of it, there are plenty of stars that will be brought together to make this movie something special and something that we’ll have to hope will be shown on the big screen.

I Remember You #JeffGoldblum pic.twitter.com/gFAv6LGFH3

Thankfully theaters have reopened and are operating at a limited capacity, which means that the returns on the movies that are being shown aren’t that great. But perhaps once Jurassic World 3 comes out we’ll see a return to a bit of normalcy that people can still remember. Admit it, that would be nice. What would also be nice is that if the next Jurassic World movie was to be the last, but while it might be the last time we’ll see some of the stars, it doesn’t sound as though it will be the last we’ll hear of the idea since it’s already been stated that the plan is to keep things going once the third movie wraps. That in itself is a little bit depressing since if anyone’s really keeping count, the whole ‘recreating dinosaurs is a bad idea’ has really been done a couple of times now and it’s only gotten worse with each rendition, meaning more dangerous and more unpredictable since facing facts isn’t what the characters in the movie have been told to do. Instead, they’re being told that big, mean creatures that resemble dinosaurs but are definitely not the same thing is perfectly harmless and there’s no way a predatory dinosaur would ever escape their confines and start eating people and….wait, what, they did? Oh right, because the idea that creating something that wouldn’t have any idea of the difference between 65 million years ago and today is a great way to entertain people as they run for their lives screaming at the top of their lungs. That’s kind of the premise of the first three and the last two movies, and if not for Chris Pratt’s character growing attached to a group of the deadliest predators in the movie it’s likely that he too would have been firmly against creating something that’s capable of knocking humanity back down the food chain.

Seeing Sam Neill and Jeff Goldblum make their way back to the movie though is going to be great since the two of them helped to start off this insane ride and have more or less been two of the most staunch voices against the idea of creating dinosaurs no matter their different ideologies. To be fair, both of them were right, since Dr. Grant made it clear that there was no way to predict how humans and dinosaurs, who were separated by millions of years, would react to each other. Dr. Malcolm made it clear with his chaos theory that things were going to find a way to push forward, no matter how violent it would get. While they both came at the issue from a different angle they were both right, as it’s been proven, and the idea that anyone would actually want to clone a dinosaur just because they could, or create one from genetic material because they think it’s a good idea, is the kind of insanity that’s more than a little dangerous since it means allowing chaos to run rampant and see who proves to be the more capable survivor. It’s nice to see that the two men had a chance to enjoy a quiet and pleasing moment together since it’s easy to think that once the movie is released that they’ll be pretty busy if they aren’t already.