Home
This Is Us
This Is Us Review: Stallone’s Presence Delivers A Big Kevin Shocker 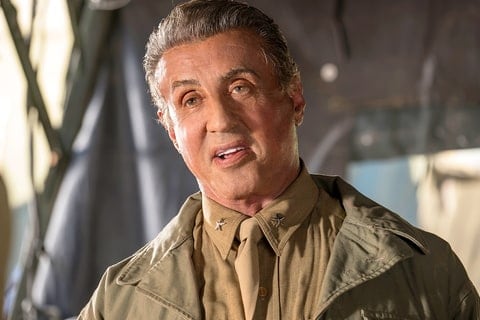 If there were ever two names that were never expected to come together, it would have been Sylvester Stallone and This Is Us. Yet it happened. The story which brought the infamous actor to this critically acclaimed show involved pairing him with Kevin Pearson on a new movie, with Stallone playing himself. Though the circumstances of how Stallone is introduced to the Pearsons are contrived, I’m reminded of something Kevin’s portrayer Justin Hartley recently said in an interview with Larry King. Hartley said that for this show, sometimes you have to stop acting for a bit because the material and emotion is so real. There is nothing more real than losing a parent. For a son to lose his father, it is a brutal loss. We saw Randall go through that last season with William, and it is having interesting effects on him now. Save for one moment when Kevin opened up to his nieces, we have never seen Kevin really discuss what losing Jack meant to him-until now. And it’s all thanks to Sylvester Stallone.

On the opposite end of the parent-child dynamic, Randall and Beth are dealing with a child who has never had a stable force in her life. To Randall, Deja is a legacy he is fulfilling to honor all of his parents. That is a lot of unfair responsibility to put on a young girl who does not trust anyone. Randall is such a consistent planner, it’s a really though thing for him to accept. Deja’s experiences may be different than William’s, but we see why their feelings are similar. It is scary being in a new place, where you don’t know the rules, and you don’t know if you’ll be accepted. What little progress the Pearsons make with Deja is shattered like that picture frame she throws when she finds out her mom is going to jail, and won’t be coming back for her. No one said this was going to be easy.

In the past, the Pearson kids rally around Randall as Jack and Rebecca struggle to hold on to their emotional and physical intimacy weeks after Jack’s confession. From this we get a few more clues about the timeline to Jack’s death. We know that Jack and Rebecca eventually smooth things out, we are introduced to the Pearson dog Kate clutches when Jack dies, and we reconfirm that Randall tried and failed to find his birth parents. A more shocking clue is inadvertently uncovered by Stallone’s presence.

Can you imagine how many times Sylvester Stallone has heard people compliment him for Rocky? It’s been over 40 years since he took that role, but because it’s so iconic, he has to hear it. What makes the difference to someone like that is hearing why they love his movies, and how it made a difference in their life. Kate tells her new friend Sly all about Jack and how his movies made Jack’s days better. Those are the stories that stand out to an actor like that. That’s the reason no one in this business ever retires. Sly and Kevin have a conversation about time and the strength of memories, which completely throws Kevin right before a huge scene. He delivers a powerful monologue, but the flood of memories of Jack become too much. Kevin gets distracted and injures his knee, the same knee he injured in high school right before Jack died. That’s not the scary part. What makes your heart drop onto the floor in shock is Kate telling urn Jack that Kevin is just like him, at the same time that Kevin is popping pain pills.

Is Kevin going down the same path as Jack, or is he already there? Did Sylvester Stallone deliver?

This Is Us Season 2 Episode 3 Review: "Deja Vu"

Sylvester Stallone’s guest stint on This Is Us leads to a whopper of a reveal about Kevin Pearson.