Home
This Is Us
This Is Us Review: The Haunts And Hopes of Halloween 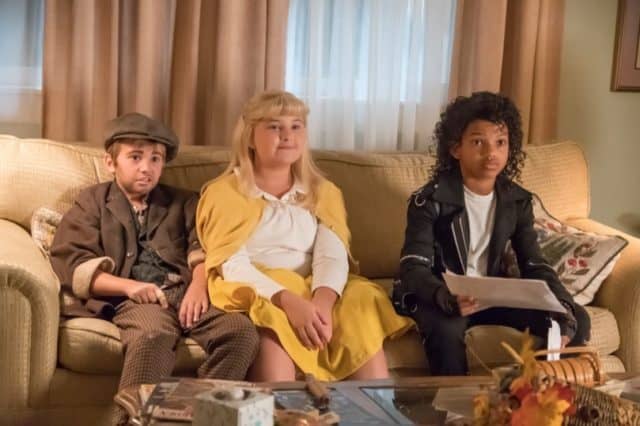 What roams on Halloween besides ghouls, goblins, and various 80’s references? The ghosts of our pasts. This Is Us shows us this fear in not just one, but two different flashbacks. In a unique twist, watching the Pearson’s in their 20’s greatly informs how they became the people from the beginning of the series. The 80’s fashion was unique, but seeing the Pearson’s at 28 was rough. We all have a beginning and an end, but as Rebecca says, the middle is the hardest part. It’s also full of possibilities, if you’re willing to let go of what you think should have been.

On Halloween 1990, Jack and Rebecca try to make the holiday special for three very different children. Kevin was kind of left to his own devices, though he’s always been the one to tear off towards what he wants. Jack and Rebecca were really concerned about Kate and Randall, respectively. That doesn’t reflect on their abilities as parents at all, it just explains where Kevin is in his life in the present. Jack and Rebecca tended to indulge Kate and Randall more so that they wouldn’t be disappointed or anxious. Even then, they could tell life was going to be more challenging for Kate and Randall. On some level, Kevin knew that too, which is why he bribed Kate’s first crush to hold her hand in the haunted house. Rebecca is forcibly pushed into telling Randall the truth about his adoption when some meddling neighbor decides it’s their place to tell Randall that he “replaced” baby Kyle. Talk about a frightful night. It’s just the first of many conversations Rebecca would have with Randall through the years, and unbeknownst to her, it would not be the first time she would have to do so without Jack.

We’re also visiting a decade in the Pearson’s lives we haven’t before, their 20’s. Long story short, everyone’s a little wigged out. At 28, Randall was extremely anxious before the birth of his first child, having just gotten over his breakdown. Kevin was getting nowhere in his career, willing to sell out his friends just to get a part, and Kate was wading into the dating pool with a married man. It was a low point. Neither one of them could stay in one place, spinning their wheels, expecting life to happen to them. This is what sparked Kate’s move to L.A., which is how Kevin finally started booking parts again.

A decade ago, Randall was the only one who had things figured out, at least on the surface. He became so obsessed with trying to make everything perfect for his family, he cracked under the strain. It takes some random store clerk to help him realize that “Babies come with the answers.” Babies also do what they want to do, which Randall learns pretty quickly when Beth goes into labor and has to deliver at the house. Once Randall lets go of the anxiety and focuses on the moment, everything is perfect, except for one thing. Jack is not there. Now it’s Rebecca’s turn to fall to pieces. She watches her first grandchild in the nursery, and this time Jack’s not over her shoulder the way he was when Randall was in the same spot. She has to push forward alone. Push she does, by reconnecting with Miguel.

What’s tragically true is that no one is supposed to have life figured out in their 20’s. We’re still watching the Pearson’s in their 30’s, and they’re just barely getting there. The rejection that Kevin and Kate faced was cruel and heartbreaking. It was also all too normal. Same with the anxiety Randall had. We only just saw him start to let go of that, and it was an all or nothing decision. The middle is the hardest. It’s also the most rewarding.

This Is Us is haunted by the ghosts of Halloween’s past, and the pain of their 20’s.