Home
This Is Us
This Is Us Review: This Is Disappointment 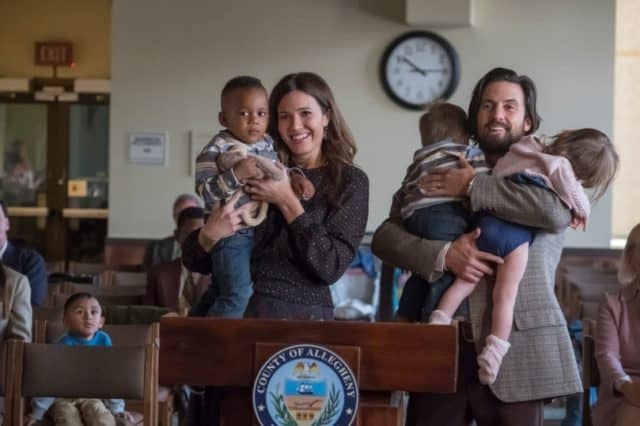 Of all of life’s emotions, disappointment might be the most painful one besides grief. A child who feels their parent’s disappointment, a concerned parent disappointed in the actions of another parent, or a man disappointed with life in general. Nothing ever turns out the way you expect, so disappointment is an inevitable shame. This Is Us is building one of its most powerful stories around the concept of disappointment in one’s self. If left unchecked, it can turn into a cycle of self-destruction, but it also has ripple effects on those we love. Watching William and Kevin’s addictions and how they’ve manifested is just the start to this.

It used to be that Kevin had something or someone to anchor him. Now he doesn’t have anyone who is close enough to see the signs. Sophie is on the other side of the country. With her work and her sick mother, she can’t move. Kevin can’t rely on his twin because Kate is having a baby. Everything in her life is coming together, and Kevin would never begrudge her that. That means that he is spiraling hard and fast. He can only see his future mistakes, how he will be a disappointment to everyone if he tries to be it all. Jack’s ghost follows the Pearson’s, but we’ve underestimated how large it looms for Kevin. Like Randall, he’s wanted his father to be proud of him. Randall chose to emulate his father’s actions, a move which caused him to break down. Now Kevin is going through the same thing, with the added vice that he’s inherited his father’s addiction. We know why he broke Sophie’s heart, but it was absolutely devastating to see how spectacularly Kevin did so.

As for Kate, alarm bells should have gone off in Toby’s head when Kate first brought up elopement. By now Toby knows that the only person the Pearson kids will listen to is Jack. Who better to get advice from, even if it is from an urn? A sappy re-proposal with monogrammed sweatshirts and “Time After Time” playing in the background is just the kind of thing Jack would have done. Kate deserves a big, beautiful wedding with all of the flourishes. Jack would have been the first to push that, so there is no doubt that Jack would have wholeheartedly approved of Toby and all his romantic gestures.

Randall is fast becoming Deja’s biggest champion. He is outraged that Deja puts in so much energy to try to connect with her mother, and the woman refuses to see her. It’s perfectly clear that Deja’s mother puts more energy into boasting about being Deja’s blood than actually raising her daughter. That doesn’t mean she hasn’t been dealt some hard knocks, but it doesn’t discount her responsibility to shield her daughter more than hurt her. As upset as Randall is, he also sees the situation from Deja’s perspective. Randall was upset when he found out Rebecca kept William from him. He won’t be the person who does that to Deja.

Randall is fighting for Deja, but he has no idea how hard his parents fought for him. He’s heard the story his whole life about how his parents looked through a window and saw him, immediately knowing he was meant to be their child. What he doesn’t know is that Jack and Rebecca fought for over a year to adopt him, and it almost didn’t happen. The judge on Randall’s case was convinced that Randall should have black role models in his life. The only way he could reconcile his conscience with Rebecca’s pleas is to hand the case off to another judge.

“The Most Disappointed Man” the episode refers to is William. While Randall grows up a Pearson, his birth father’s life gets as low as it can go. William didn’t just lose Randall. He lost Randall’s mother and his own, all in the span of a year. Of course he would be disappointed in life. Life dealt him an awful card, and there’s no one there to help him pick up the pieces of his life. When William expresses everything he’s been through to a judge sentencing him to jail for drug possession, things change. That judge never had any guarantee that William would stop using, but he put the effort in anyways. It’s because that judge got through to William that he got to meet his son all those years later. No one stays disappointed forever.

Is disappointment the most powerful emotion? Is Kevin going to be able to get it together like William, or will he spiral farther and faster?

This Is Us Season 2 Episode 7 Review: "The Most Disappointed Man"

This Is Us gives several explanations of what disappointment looks like.