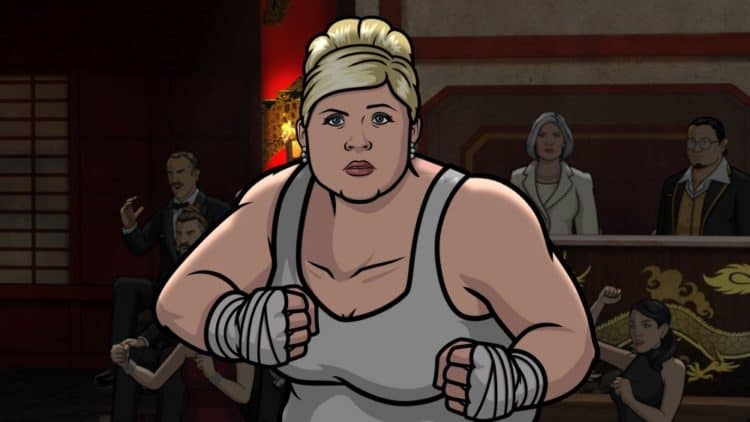 A lot of times when asked a voice actor, or just any actor that performs a voice role, will say that they had a lot of fun and that it was a good time. Some of them will mean it and don’t mind doing voice work that often, but others might only do it sparingly for their own reasons since they enjoy being on camera. When it comes to Amber Nash’s character on the animated show Archer it sounds as though she really enjoys how the character of Pam has developed over the years, especially since she was initially a glorified extra that was kind of a fringe presence at best. When Nash was on her way to work another gig it sounds as though the higher-ups decided to bring her character into the main part of the show and rather than just take off she made the decision to stay, and Pam has been a big part of the show since. Obviously fans responded to the character in a way that allowed her to stick around since those that watch such trends and take note of who comments on which character and so on and so forth are a part of the reason why some characters stick around and others are booted off at one point or another.

That’s an interesting part of any show, who gets the boot and who gets kept as a regular, and a lot of it has to do with how the character, be they animated or live-action is accepted by the audience. Sometimes even the most terrible characters can be idolized and loved by the fans since they serve a purpose even if they’re simply the worst person possible. With Pam, it’s easy to see why Nash happens to like the character since despite the fact that everyone on the show is some kind of awful they all somehow manage to get along in a way that’s hard to fathom, but perhaps it’s because they’re all pretty bad in their own ways. Pam is almost the heart of the team though and is best friends with Archer no matter how hard he is to like. That alone is probably why she’s been a strong enough character to stick around, other than Nash’s voice talents and the fact that she has enjoyed the evolution of the character. It might sound odd to say that a fictional character can evolve, but the truth is that with each episode and each new development in any given show, any character can continue to develop as the writers, the animators, and of course the voice actor manage to conspire to put together a more impressive and detailed character as time goes on.

Pretty much every TV show goes through this, as do movies that run in a series. The development and evolution of characters is vital after all to ensure that the main characters, and those that are brought in later, experience some form of change and are seen to react naturally to their surroundings, much as anyone would expect. In animation, this can be tinkered and played with occasionally since there are many animated series where very little has changed and the main characters are still pretty much the same way they were when their shows started, such as The Simpsons, Family Guy, and several others. The thing with animation is that it’s not always bound to be as realistic simply because of the nature of the show, but it will always strive to be entertaining and take as many liberties with reality as it can while attempting to bring a great show together for people to watch and enjoy. But even animated characters have to change now and then in order to keep people watching since the same thing over and over gets a bit tiring and can become extremely stale. Some shows that haven’t changed in a long time didn’t last, while some of them have had to make drastic changes at times to really keep the audience watching since otherwise people’s eyes start to wander towards what’s new, what’s a little more exciting, and what might keep them entertained longer. It’s brutal sometimes, but it’s the truth.

With Archer, this has happened on a pretty regular basis since the show is the kind of program that has made a lot of people think WTF more than a few times thanks to the actions of its characters, and this is a big reason why it’s been able to last so long. People want to be shocked, they want to be titillated, and they want the drama to continue as much as possible since without it the show becomes kind of boring and predictable. Thankfully Nash still enjoys her character, even more than before to be certain, and is dedicated to keeping her around.

The Reason Why Donnie Darko Bombed at the Box Office