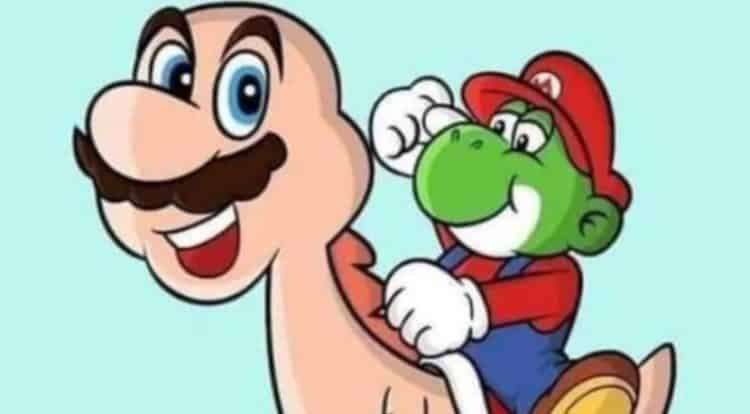 I’m with Kevin Burwick from MovieWeb on this one, this just looks wrong on so many levels, one that comes immediately to mind, that it’s worth a cringe or two and really doesn’t seem to warrant much more than a serious amount of criticism even though some people have been intrigued. Face-swapping can be an interesting and even funny idea sometimes but this just kind of takes things to a place that’s more nightmarish than cartoon-like. Yoshi looks fine to be honest and he looks as though he could be a genuine and very likable character, but Mario, huh boy. If your thought is that he’s ended up looking like a giant phallus with arms and legs you’d be thinking along the same lines as a few people, but if you want to go ahead and think that it’s payback for treating Yoshi like a pet and his transportation since Yoshi was introduced. Seriously if you’ve ever played the game you might have felt a little bit sorry for Yoshi since not only does he manage to gobble up all the enemies that come after Mario but he gets pretty spooked when he gets hit by one of them. Also, Mario seems to ditch him pretty regularly as he moves on throughout the level, which leaves a person to wonder just how Yoshi manages to get along on his own. Of course it’s a game and I’m kidding but looking at this picture it’s kind of poetic justice as well since Yoshi, as innocent as he typically is in the game, might want to get a little payback now and again.

Honestly I’ll agree with Kevin again, this is probably the worst idea for Mario Bros. since the live action movie came out, and that was absolutely horrible since it didn’t seem to follow the game hardly at all. And Yoshi, poor Yoshi, was just a little lizard that was there for the simple idea of hearing his name and not much else. This however is at least amusing in a way once you get past the idea of what it could possibly represent and just decide to have fun with it. Mario Bros. has been a long-standing game franchise that goes back quite a ways, before a lot of us even knew about the game and can remember when Mario and Luigi were basically the same character with different colors to their outfits. Anyone remember the old arcade version of Mario Bros. with the POW box at the bottom and the goombas and koopas that kept pouring out of the pipes? That had to be one of the simplest versions of the game, but when it came out it was what a lot of us played because that’s what we had. Then came the Nintendo, and with it Super Mario Bros., which some people defeated in a day or two and some likely haven’t figured out to this day.

The illumiLADY just showed me this… I hate it as well but can’t stop staring at it. This is #Art lol YOSHI, GET OFFA MARIO!!! pic.twitter.com/A1JIG63xUa

From that point on Mario Bros. went on to even bigger and better heights, sometimes. Personally I’m still stuck on Mario Bros. 2 being one of the best games in the franchise since as a player you could pick from Mario, Toad, Luigi, and Princess Peach, and they all had their specialties that made them unique, with Mario of course being the most rounded player among them since he’s been numero uno since day one. As the games kept coming out though the power-ups kept getting more and more technical and stranger as some of them could turn you into a statue, some of them offered limited flight, and yet the classics still remained since they were just that awesome. Perhaps my favorite part of part 2 was that it allowed the player to pick things up, and the action looked real enough in some cases and the graphics were way beyond the first game. In a way, part 2 was pretty easy to navigate since it didn’t have as many mind-numbing challenges as the first game, but it was also more colorful and more engaging in a lot of ways since the world had expanded quite a bit and Mario and his friends were a little more animated. The twist at the end though, finding out that it was all a dream, seemed like kind of a weak payoff.

By the time Yoshi came in though and the Super Nintendo was out and as Alex Newhouse of Gamespot reveals, Yoshi is not his full name. Instead of going into that however I’ll just say that the anthropomorphic dinosaur has been a fan favorite for a long time and it’s not much of a surprise that someone would decide to add a bit of whimsy to the Mario image and try something like this on for size. It’s not the best idea in the world and it’s kind of creepy, but hey, to each their own.