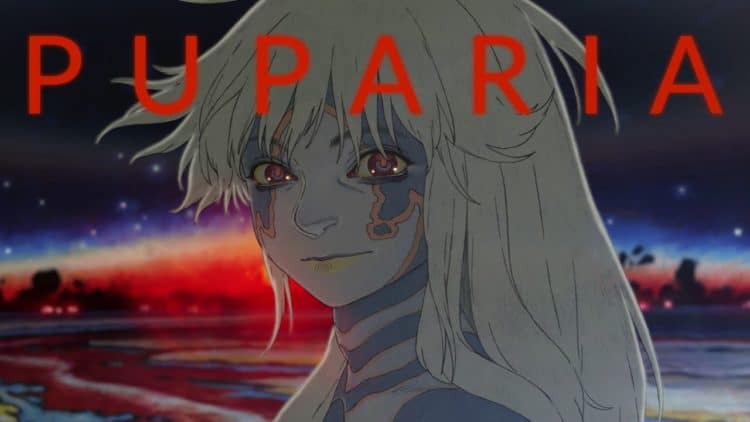 Taking a look at Puparia might not mean as much if you’re not an artist in any way, since it could be something fun to look at but not much more. If you’ve taken the time to see something through from start to completion though, you might appreciate the fact that it took the artist, Shingo Tamagawa, three years to create this short bit of animation. Some people might be wondering where the narrative is at, why it doesn’t appear to make sense, or even what the point of it all was. Well, you’d likely have to ask Shingo if you want to real low-down on what this short animation is all about, since getting inside the head of an artist can be a messy experience, or it can be something that’s so utterly confusing that you won’t soon forget it. Once they invite you in though, well, you have the choice to walk the line between reality and imagination, or just view it from afar. It sounds overly dramatic, doesn’t it? Art is sometimes a very interpretive thing, and it tends to mean something different to each person.

What’s easy to understand in the second video, in which Shingo explains himself and his work, is that a person can in fact get lost in what they’re doing. In many art forms, this is possible, since straddling the line between what’s real and what’s imagination can take the artist on a trip that not all of them want to come back from. Puparia has the look of something, a world unto itself, from which someone might not want to come back if they find themselves immersed within it too deeply. A lot of people think they have a good handle on the world because they rely heavily on what they see, hear, touch, and otherwise experience through the five senses that most people are born with. But jumping into a world of imagination broadens those senses in a way that many people understand and only so many fully embrace.

Three years does sound like a long time to create such a short animation, and even the massive amount of detail and the manner in which it was rendered makes it hard to figure out how this would have taken so long. On the other hand, it’s fair to state that rushing art isn’t that great of an idea, since if that’s what happens then it tends to become a mainstream project that starts to lose the unique quality that might set it apart from so many other similar creations. It’s too easy to go back and forth on something like this since trying to justify how it took so long versus stating that perfectionism is at times a little overbearing is a continual argument that doesn’t always have a satisfactory end for everyone involved. But in the attempt to level things out, let’s just say that Shingo might have felt himself slipping a bit from time to time into the fantasy world of animation and might have needed time to relax and settle himself before getting back into it.

It’s easy to criticize in this manner if you don’t stand at the brink, wondering what it would be like to simply drop into the fantasy and let the real world fall behind. It’s not dramatic really, since the human mind can come up with the most fantastic things now and then, and the temptation to accept them as reality is terrible now and then. If one needs proof of that, look at the world we live in versus the imaginary realms that people come up with. It’s extremely tempting to drop into the fantasy for a while and forget the real world, no matter that it can be every bit as beautiful and terrible as anything that one’s imagination can summon into being. Perspective, point of view, and interpretation play a huge role in Puparia since one should be able, hopefully, to realize that this world was three years in the making for a reason, though what that reason might be is Shingo’s, and doesn’t belong to anyone else unless he says so. As always it’s a bit dramatic, but it’s real as well since artists put a great deal into their work.

Many artists want people to experience what goes on in their heads, which is why we get to see it online and elsewhere. In some cases, this is an outlet for people like Shingo that want others to witness their creations and understand what it’s like to exist in his imagination if only for a short moment or two. Most are out to make money with their designs, as this is a goal that many artists have. But if they don’t have the passion to push it forward then it becomes another product off of an assembly line. Quality takes time.