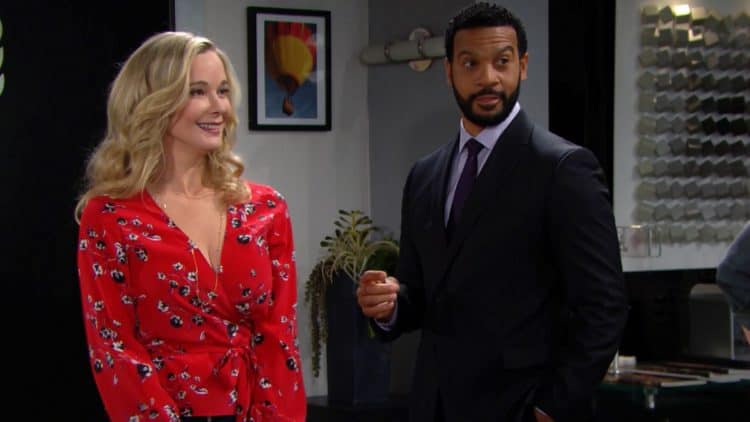 Bold and the Beautiful fans have been around for a few years, and we all know that there are some moments that occur around here that just stick out a bit more than others. Not all of them, of course, but some. What sticks out for me might not stick out as much for you and vice versa, but we think that there are always a few pivotal moments that are a bit more unforgettable than others. Do you think that your moments fall into this category, or do you feel that you have more to work with? We’re going to share the moments that happened on the show that we feel are the most unforgettable of all, and we want you to do the same. Drop a comment with yours below.

Who can forget this? This might be one of the most unforgettable moments on the show to us because it’s just not possible in real life. There’s just no way. There is no way that this woman slept with this kid and didn’t know it was not her husband. There is no way that Brooke wore a mask and her daughter’s teenage boyfriend thought they were the same person. There is no way her teenage daughter’s boyfriend was in a mask and she thought he was her husband. There’s no way that they were able to sleep together, and that this kid thought this was the way Hope would want their first time, and that she didn’t feel the difference between her older, experienced husband versus a teenage boy without any experience at all. It’s just so mindboggling to us that this even happened, that they got over it, and that no one was carted off to prison for this kind of situation when it went down. Too much for us, but nothing we will forget in the near future.

When Ridge Stole Brooke from Bill

Remember that one time when Brooke was set to marry Bill, and they decided that marrying in LA was boring and not right for them? They planned an elaborate wedding in Dubai (Because it’s not like either of them had been married 27 times before or anything crazy like that) and Ridge decided it was a no for him. He wasn’t having any of it. He wasn’t going to do anything that would allow Bill to marry the woman he’s loved and cheated on and not been good to on and off over the years. He was going to take her for himself, so he did just that. He rode in and stole her, literally grabbing he by the hand off a beach in Dubai and running down the sand along the shoreline with her. It was a real thing, and he was really there for it. It was a moment we’d never forget. Brooke’s face acting like she didn’t think this was a good idea, yet there she was all up on it and doing it anyway. We loved it.

When Pam Tried to Kill Donna

We love Pam. And we love Donna. And we love that Pam has forever been a part of the Forrester family. She lives and works for the family, and she does all she can to protect them. This is why it’s so amazing to us that she once kidnapped Donna, tied her to a chair, poured honey all over her head and encouraged a swarm of bees to attack and kill her. Somehow, that did not work out – shocker, we know – and Pam lived to tell about it. Yet no one in the Forrester family was at all worried that Pam might not be her best, safest self. There as a split second where they were shocked and appalled by her behavior, and then she’s back to working for the family, caring for the children, and having unlimited access to all the things no matter what she does in her life. It just never fails for us that this happened and no one is at all concerned about her behavior or actions. No one. In fact, she and Donna worked together after that, and it wasn’t something anyone thought might be a strange or uncomfortable or even dangerous situation.

What We Learned from the Castlevania Season 3 Trailer

Whatever Happened to Shawna Waldron?

Shouldn’t Planet of the Apes Be Left Alone at this Point?

Knives Out Reimagined as a Rom Com in Funny Trailer