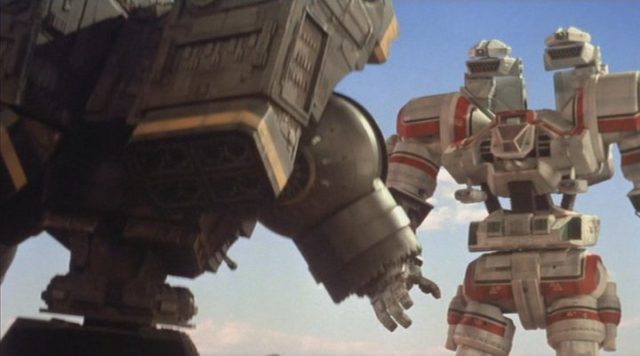 It’s been almost three decades since the highly anticipated film Robot Jox came out, and it’s more than due for a reboot. In an age when reboots and remakes are becoming the norm, this movie deserves its time in the sun once again. Back in 1989 the technology hadn’t quite caught up to the grandeur of the story and as a result we were left with a choppy, very early version of an epic fight between robots that might have been the precursor for such shows as the Power Rangers. The stop-motion of the fights was amusing but woefully inadequate for the level of intensity that was desired, and unfortunately in those times that was as good as it got without resorting to filming a cartoon.

The current generation deserves to see what Robot Jox could look like with the latest, cutting edge technology. But what would be so great about it?

Each fight would be more intense.

With the onset of the Transformers franchise, Pacific Rim, and now the newest Power Rangers film, it’s obvious that the current technology can handle the prospect of giant robots being made to walk, run, and look entirely real. CGI and various other technical means could bring the robots to life in a way that simply wasn’t possible in the 80’s. In this manner the impressive array of weaponry could actually wow the audience and give birth the feeling that this is a high stakes match that will decide the fate of nations.

The premise is still sound enough to be used as a main point of the film.

In Robot Jox open warfare has become illegal, hence the massive robots that are used to settle the disputes. Pilots for the robots are trained and then selected to fight in gladiator-type matches that pit them against one another using these huge robots as their weapon. Of course it becomes clear during the film that one side is spying upon the other, gaining knowledge of tech and methods that could give them a huge advantage. But as the movie goes on it is very clear that war between countries is no longer an issue, as it is settled between one faction and another in this very simple manner. The robots aren’t a last line of defense or even a deterrent for further conflict. They’re a means of settling a dispute in a brutal fashion with a definite sense of finality.

Giving the robots an upgrade could prove interesting.

In the film there are a host of weapons that each robot possesses to inflict maximum damage upon their opponent. Rocket-powered arms, humongous chainsaws that spring from hidden compartments, projectile weapons, and so on and so forth. Giving these robots an upgrade so that they could wow the audience would no doubt prove interesting enough that it would give the film a little more credence so as to inspire the imagination of the designers. If the megazord in Power Rangers could whip out twin swords that were attached to its back there should be no limits to what a robot in this movie could wield.

Let’s give Robot Jox another chance. With a reboot and an upgrade there’s no telling how far it could go.