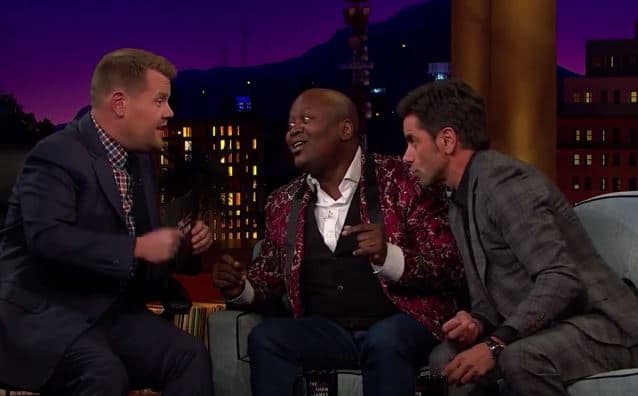 Grandfathered star John Stamos and Unbreakable Kimmy Schmidt‘s Tituss Burgess were both guests on The Late Late Show With James CordenÂ last night. While both actors were a ton of fun throughout the whole show, it wasn’t until near the end of the episode that the best moment really happened, as Stamos and Burgess teamed up for a duet of “Kiss the Girl” from Disney’sÂ The Little Mermaid.

So how did this whole duet come to be? Well, we can thank Reggie Watts, leader of theÂ Late Late Show‘s band, for it, as his question to both John Stamos and Tituss Burgess helped lead to the song.

As you can see in the video below, Watts asked the two actors which place they would avoid if they had the ability to fly thousands of feet up in the air. After Stamos made a joke about avoiding Watts’ hair, the conversation quickly changed to where he, Burgess, and James Corden would want to fly to, and Stamos saidÂ Kokomo before beginning to sing actual Beach Boys song of the same name.

After Stamos started singing, he quickly turned to Burgess and asked him if he has a high voice. Even though theÂ Unbreakable Kimmy SchmidtÂ actor seemed hesitant at first, it wasn’t long until he, Stamos, and Corden as well were singing the famousÂ Little MermaidÂ tune.