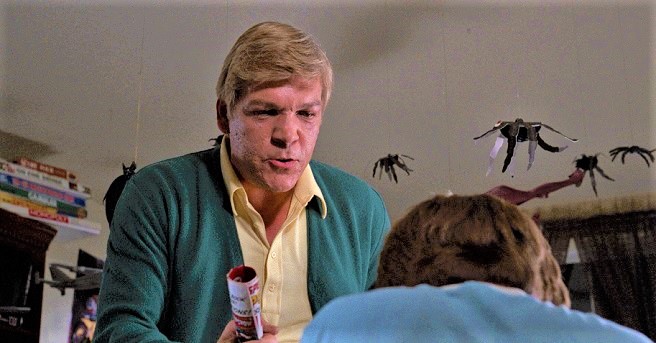 There are those faces in the movie business that you tend to remember since you’ve seen the individual more than once throughout the course of your life in different movies, and Tom Atkins is one of those that many people can make this claim about. He’s showed up in both TV and movies and has, a lot of the time, been the kind of character that a person either detests entirely or kind of likes depending on the character he’s playing. He’s one of the many actors that can play a truly despicable bad guy and yet be the kind of warm and caring good guy that you want to be friends with. Of course he can do everything in between as well, but the roles he takes as the antagonist tend to be remembered more often since in some movies he’s had the chance to be the gruff kind of individual that you can’t help but dislike since he has no give to him at all.

Here are a few things about Tom that you might not have known.

10. He’s been a huge fan of science fiction and horror for a long time.

It sounds as though he’s been a fan both genres since he was a kid, and obviously that love didn’t go away as he got older. Some people tend to hold onto the things they really care about since in some cases it’s worth the effort, especially if helps to make them famous or get them ahead in some way.

9. Tom came from a blue-collar family and that’s influenced his acting in a big way.

In acting it only ever seems to matter where you come from when determining how hard a person has had to work to reach their intended goal. Those without as many means tend to have to work just a little harder while those that have the means can sometimes waltz in thanks to acting classes that were bought and paid for and try to get a job. But what really differentiates people is the work they’re willing to put in on the set.

Tom has had a long and very storied career as he’s taken on a lot of different roles in his time and made them all work for him to one degree or another. Some people might remember his most famous roles and some might remember the more obscure ones, but it’s remembering him that’s the point.

7. When he was younger he enlisted in the US Navy.

It’s great to realize that some of the people we see on the screen have actually served their time for our country and have put in the effort to get ahead. For Tom it was a way to pull ahead and get himself in college after a while, where he started taking drama classes and headed down the path he wanted.

6. He starred in Lethal Weapon.

Tom played the ‘grieving’ father who was in truth running a front for a drug operation and had reached out to an old army buddy, Roger Murtaugh, for help when he got in too deep. As punishment the people he was working for killed his daughter, in a way, and eventually came for him.

Remember the overbearing father figure that appeared before and after the tales were told? That was Tom at one of his most hated roles since a lot of people couldn’t help but think that he was being entirely unfair. But creating a voodoo doll of him might have been a bit childish.

After so much time in the industry you might think that he’d be worth millions at the very least, but it almost seems as though Tom has kept things simple in his life and hasn’t really bothered with amassing the same type of fortune as others.

3. He doesn’t seem to have much of a social media presence.

This isn’t really all that surprising since Tom, like many people in show business, easily predates a lot of methods that were used to make the stars famous and to spread the news about their celebrity status. He might have a presence but it’s hard to find, so it might be small or confined to one platform if he does have one.

2. He’s been in a few very noted old horror movies.

Tom hasn’t shied away from work in the past as he’s made his name and made good and sure that people will remember him as time goes on. There are still a lot of titles that can be viewed if one is willing to look for them.

1. Tom is still active in the industry but it does look as though he’s been slowing down.

There have been gap years in his productivity and given his age it’s not hard to think that he’s been taking it easy.

It’s worth watching a few of his movies to see him in action.