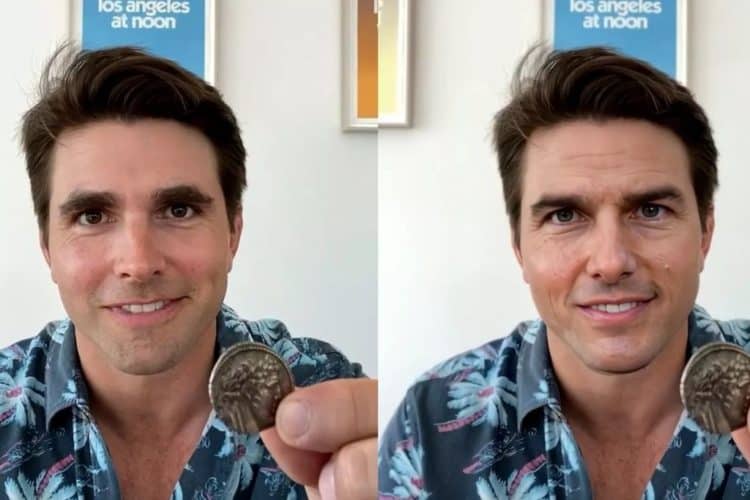 At the risk of sounding like ‘that guy’ that just has to be right, this isn’t quite as impressive as it used to be since the TikTok user that finally came forward to talk about the Deepfake of Tom Cruise that for one reason or another went viral is no longer the cutting edge that Deepfake was when it first came on the scene not long ago. That’s how quickly people get used to technology unfortunately since by now a lot of people have seen this effect and they’re no longer fooled by it as much, especially when it’s so easy to check online to see if the actors that are being imitated are in fact aware of what’s going on. Getting an impersonator was smart since just anyone off the street wouldn’t really be able to pass for Tom Cruise when it comes to his body type, face shape, etc. But if we’re going to talk about stuff being ‘seamless’ when it comes to pasting Cruise’s face over the impersonator, then we need to make it clear that it might be harder to see, but there are still small, very small glitches that can be found around the corners of the face and as a result, it’s still not as realistic as it could be when looking at the video. If anyone wants to dispute this that’s fine, but the truth is that it’s not entirely perfect, and might not be until someone can find a way to be truly seamless and button up any issues that arise from pasting Cruise’s face onto the model.

That’s not taking away the fact that it is impressive and that it does take a while to accomplish, since recognizing that is easy. But thinking it’s revolutionary is a little troubling since it’s also something that many people are already worried about in terms of becoming a problem as well. Think about the way that this could be used and applied, and then think about how it might work if it did advance to such a degree. Like it or not, the technological advancements that people want to believe are going to be revolutionary, impressive, and a boon to humanity are every bit as capable of becoming the bane of humanity as well since one can call it paranoia or something else, but the fact is that this would be a great way to scam people as well. I know, it sounds ridiculous and more than a little paranoid, but it also sounds like something that might be wise to listen to since if a person can already steal an identity and learn just about whatever they want through a quick internet search, just think about what they could do if they had the use of someone’s face.

It’s not something that’s meant to scare anyone, as Deepfakes have been becoming increasingly popular over the last year or so, and it is kind of intriguing when one thinks of how much work really goes into each face. But still, the application that such a program could be used for, and the harm that could be done with it, isn’t something that a person should be willing to simply shrug off. Technological advancements are about as neutral as they come as all creations should be, but the fact is that there are still plenty of people out there that might be salivating at the chance to try this out in some sort of scam that might net them a great deal of money from any unsuspecting and far too trusting individuals that might be happy to give over their hard-earned money to someone that’s posing as a celebrity for one reason or another. When one figures that celebrities are used for various charities and giving money to other causes it becomes less far-fetched, and a lot more dangerous. It’s the kind of thing that would in fact make a person not trust anyone since there are ways around it and ways to verify who a person is other than facial recognition and various facts that anyone could pull off of the computer, but that means trusting people becomes harder and far less certain than it’s ever been, and it’s already hard enough for some folks to trust anyone.

Seriously, it’s impressive, and the work that’s done to create the image is something that would never have been thought possible a few decades ago. But with every stride forward it would appear that humanity is hoping that no one will take advantage of others when this type of technology is made available. That’s a lot of trust to give when it’s already been shown that people are going to take what they want and not worry about how much it hurts the next person. So yeah, it’s impressive, but it’s still worth being cautious.