Home
Dancing With The Stars
Tonight on Dancing with the Stars Season 14 Finale: Judges’ Choice
Prev Article Next Article 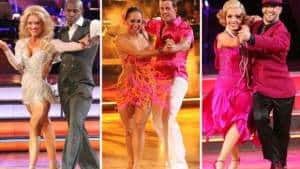 The Dancing with the Stars Season 14 Finale is here, and there promises to be a showdown like no other season has seen before. Check out the promo video below. The final three, who have been top contenders all season, Donald Driver, William Levy and Katherine Jenkins, are set to perform two dances on the 1 hour performance show Monday night. They have each been given a dance by the judges to perform, as well as dance the highly anticipated freestyles. The judges have chosen a dance the couple has performed before but maybe not so well, and this time around new music and choreography will be incorporated. What the judges are looking for here is to see the growth and improvement since the first time they danced this specific dance:

On Tuesday night’s Dancing with the Stars Finale results show, the finalists participate in a ’24 Hour Challenge’in which they will have had 24 hours to pair a chosen dance to music given to them just after Monday night’s show. This routine will be scored out of 30 possible points and will round out the judges’scores (and viewer votes) across both nights.

Judge Carrie Ann Inaba has expressed her opinion, stating publicly that she thinks the winner will be William. She claims the favorable response from the audience each week, which is nothing like she’s ever seen, means he’s the likely winner. Well with her and Bruno scoring it that way, it just might. Even though the power of the voting public can never be underestimated, the problem with this finale is that the judges will have the last say. On Tuesday, after all the votes have been tabulated, the judges will score the ’24 Hour Challenge’, the season’s final dance. If they know the voting outcome before the show, they then have the power to sway the scores in the direction they want. Crying foul again!