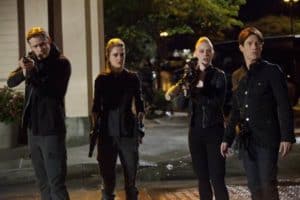 The penultimate episode of True Blood will hopefully show us the ultimate show-off between the vampires and witches. The last episode ended with Eric (who now has his memory back), Bill, Pam and Jessica walking towards the Moongoddess Emporium, prepared to blow it to Hell. Inside, Marnie still has the members of circle trapped. When Lafayette, Jesus, Sookie and Jason attempted to get Marnie to release them, everyone but Jason disappeared (presumably transported into the shop).

In tonight’s episode of True Blood, the stand-off between the two groups reaches the point of no return. Marnie wants to bewitch Bill, Eric, Pam and Jessica into a suicide march, but Sookie manages to use her faerie powers to prevent this. Jesus casts a spell to attempt to unbind Marnie from Antonia (the spirit possessing her). Sam, reeling from the recent death of his brother Tommy, settles a score with Marcus. Alcide, who no longer wants to be part of Marcus’ werewolf pack after seeing what they did to Tommy, decides to confront Debbie about her allegiances.

Below are three sneak peeks for tonight’s episode. In the first video, Jason tries to stop the vampires from blowing up the shop because Sookie is trapped inside. The second video shows Sam trying to get to Marcus, while the third sneak peek shows Lafayette using his new abilities to see the spirit of Antonia.