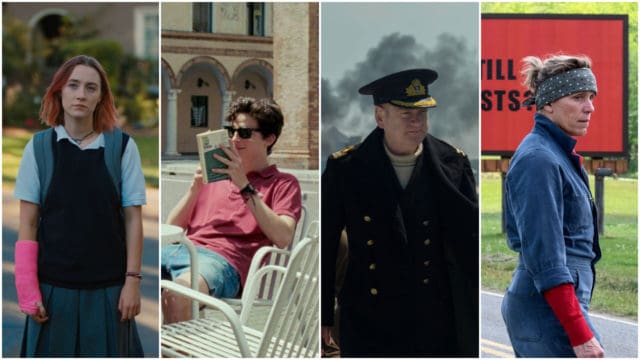 2017 was a memorable year for film. It finally gave us the much-awaited solo Wonder Woman film. Christopher Nolan directed his best film yet. A clever horror film with social relevance. A bunch of remakes and sequels. A bunch of Oscar-bait films. But, in fairness, there are a lot of great films this year whether it’s a superhero blockbuster or a small independent film. They are all part of why 2017 is a memorable year for film.

Greta Gerwig’s directional debut film received critical acclaim, and it currently has a whopping score of 99% on Rotten Tomatoes. The film, set in Sacramento, California, is a coming-of-age story of a high school senior (Saoirse Ronan) and her relationship with her mother (Laurie Metcalf). It has received several accolades among award-giving bodies and it is considered as one of the frontrunners for Best Picture. Ronan and Metcalf are expected to receive Oscar nominations for their performances. The film’s relatable take on adolescence is one of the reasons why this was loved by the audience. There is no wonder that this is the number one on the list.

Based on the 2007 novel of the same name by Andre Aciman, the film chronicles the love story between Elio Perlman (Timothee Chalamet), a 17-year old boy living in Italy, and his father’s American assistant, Oliver (Armie Hammer). Luca Guadagnino directed the film, and James Ivory wrote the script. The film received critical acclaim due to its direction, screenplay, music, and the performances of the cast, particularly Chalamet, Hammer, and Michael Stuhlbarg. It is also considered as one of the frontrunners for Best Picture. Its powerful portrayal of first love and sexual awakening are the reasons why it was loved by the audience.

Christopher Nolan’s latest addition to his filmography has been considered as his best one yet. The film depicted the Dunkirk evacuation during World War II from three perspectives: land, sea, and air. It is notable for using minimal dialogue, as Nolan said that he wants to create suspense from cinematography and music. It received praises when it was released last July and it is now considered as Nolan’s best film to date, and one of the best war films of all time. The film is also considered as one of the frontrunners for Best Picture at the Oscars, and Nolan might finally win a Best Director award. It’s no surprise that the audience loved it as well.

The film, directed by Martin McDonagh, follows a mother who takes matter in her own hands after the police in her town failed to find the suspect in her daughter’s murder. As a result, she purchased three billboards to call attention on the unsolved crime. It received critical acclaim for its screenplay, direction, and performance of the cast. It is also considered as one of the frontrunners for Best Picture. Frances McDormand, who stars in the film, is currently the favorite to win for Best Actress. The film has a subtle message that impacted the audience who have seen it, which possibly lead for this to be part of the list.

Jordan Peele’s directional debut film was an unexpected hit when it was released last February. It follows an interracial couple who visit the woman’s parents, only to find out that there is a strange and disturbing things happening. It received acclaimed from the critics and audience due to its social satire disguised as a horror film. As a result of its success, it received accolades and has also inspired a college course about the film. It is also considered as one of the frontrunners for Best Picture at the Oscars. There is no wonder that the public has included this as one of the best films this year.

6. The Shape of Water

The film, directed by Guillermo del Toro, follows a mute janitor at a high-security government laboratory who befriends a hidden sea creature in 1961 Baltimore. The film received acclaim from critics. It is considered as del Toro’s best film since Pan’s Labyrinth. Sally Hawkins is considered as one of the frontrunners for Best Actress as well as the film itself for Best Picture. The film also stars Michael Shannon, Doug Jones, Richard Jenkins, and Octavia Spencer. The film’s “unique love story” is considered as one of the reasons why it resonated to the audience who have seen it. There’s no surprise that they consider it as one of the best this year.

Edgar Wright’s blockbuster and acclaimed film follows Baby (Ansel Elgort), a young getaway driver and music lover who works for a kingpin along with several robbers. It was widely praised for its choreography for synchronizing the action sequences with the soundtrack. It received praises from critics and audience alike, and it became the highest-grossing film directed by Wright. Elgort received a Golden Globe nomination for his performance. It shouldn’t be a surprise to see the film on the list given its acclaim from the audience and the box office success.

The final Wolverine film received acclaimed from both critics and audience. It’s step on making it R-rated contributed on the reason why the film became ambitious and loved by the audience. It is considered as the best X-Men film and one of the best superhero films of all time. It was also a box office success, grossing more than $600 million dollars worldwide. Patrick Stewart received a Supporting Actor nomination at the Critics Choice Awards. No wonder that the film is part of the list.

Probably the most surprising entry on the list, the film received mixed reactions from both critics and the audience. Some of the responses are calling it as “one of the best” or “one of the worst.” The film has a CinemaScore of “F” and 68% on Rotten Tomatoes. Nevertheless, it seems that the public loves it since it is part of the list. The Darren Aronofsky-directed film follows a couple whose relationship is tested when uninvited guests arrived at their home. It stars Jennifer Lawrence, Javier Bardem, Michelle Pfeiffer, and Ed Harris.

Set after thirty years of the event in the 1982 film, it follows a young blade runner (Ryan Gosling)’s discovery of a long-buried secret leads him to track down former blade runner Rick Deckard (Harrison Ford, reprising his role from the first film). It received praises for its direction, cinematography, performances, musical score, and production design. It was also called out for its faithfulness to the original. Given its positive responses and the cult following to the first film, there’s no wonder that the public voted this as one of the best films this year.