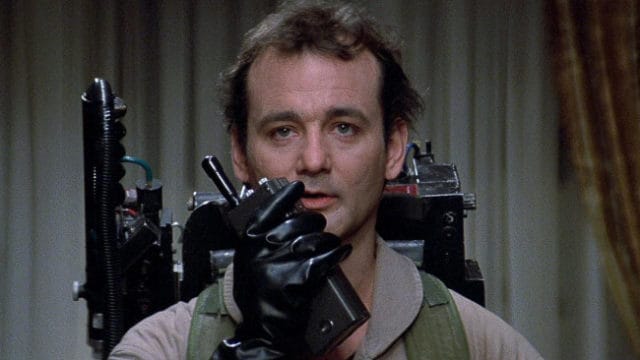 There’s no doubt about it that Peter Venkman was the spokesman of the Ghostbusters as well as the leader in some regards. He was the guy that took charge and gave them a presence while the others back him up and provided him with a team to actually lead. There was likely no one else on the team that could talk as good a game as he could, which was why his part was so perfect despite the fact that he was really kind of a jerk.

No really, as cool as he was he could be a real jerk.

Peter wasn’t one to mince words more often than not and the first time he and the guys saw a ghost in the library he was as skeptical as ever. But once they did see the ghost he started to change his mind a bit. Of course he started seeing dollar signs too when he realized that he and the guys were the only ones equipped to deal with the issue.

9. Why worry? Each of us is wearing an unlicensed nuclear accelerator on his back.

Sure, what’s to worry about? Each Ghostbuster was only wearing a device that could take out a city block or more if it went off. But hey, all in the name of science and doing the job, right? At least with Ray and Egon you had a fairly good chance of not vaporizing yourself due to their careful checks and usually spot on abilities to make sure that everything ran correctly. But uh, yeah, most people would shy away from those packs if they started up like that.

Peter was really the guy that just wanted things to work and didn’t sweat too much about the details until he really needed to. In his estimation it seemed like the detail were really kind of boring and just got in the way sometimes. Thank goodness for Ray and Egon.

You might feel a certain way too if you’d gotten slimed and then gotten a little payback on the green little spud that did it.

It wasn’t exactly the ideal date that Peter showed up to when he went over to Dana’s since she was already under deep possession and it was quite obvious. You would have thought that being thrown onto the bed would be Peter’s idea of a good time but when he realized just what was going on he at least pumped the brakes and figured that he needed to give Egon a call.

Some people actually felt a bit sorry for Walter Peck as he was a guy just trying to do his job. The sad thing is he went about it the wrong way as he didn’t find out just what might happen when he turned off the containment unit and went for it anyway. It wasn’t quite like dropping a bomb on the city, but it was pretty catastrophic.

Leave it to Peter to drive the point home with something that sounds absolutely ridiculous but at the same time makes it sound like things could get a lot kookier than they already are.

3. Ray has gone bye-bye Egon. What have you got left?

It’s funny how Ray and Egon are the brains but they tend to seize up a bit when a real crisis comes along. This is why a guy like Peter Venkman is needed, as he might stay completely calm but he at least keeps his wits about him.

2. Nobody steps on a church in my town!

Of course Peter’s going to take pride in his town. He might talk trash about it but it’s still his home and he’s going to feel a certain way when someone kicks it around.

1. Let’s show this prehistoric b**** how we do things downtown.

Oh yes, Peter knows how to get down to business and forego the niceties. This is how a person needs to approach someone that’s causing a ruckus in their city, with absolute confidence.