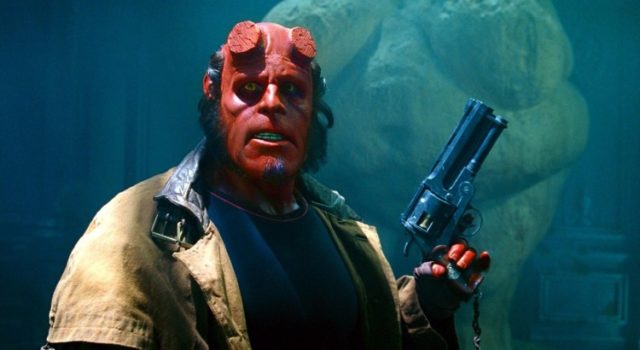 Red characters in movies are usually what one would consider somewhat dangerous, edgy, even hazardous to be around, but not always. Red can be a strong and bold color as well, denoting passion, heart, and a wild side that is unfettered by much of anything. Red is a color that a lot of people pay attention to and denotes that the character is someone worth looking at for extended periods of time, for one reason or another.

Most red characters definitely stand out.

This character makes sense considering that anger and rage tend to make a person a little volatile and more capable of exploding whenever the right buttons are pushed. But why he’s blocky and short seems to be a jab at the fact that anger makes us feel small and somehow unattractive. Or maybe that’s the wrong way to read this.

Red has a serious anger issue which is why his coloring is so perfect. He looks ready to explode half the time but there’s not a lot he can do about it. That would seem to indicate that red is a color that carries a lot of potential danger when it comes to messing with someone but can become deflated and depressed just as easily. Or maybe there’s another reason he’s red, as it could be that’s just the way he was made in the game.

Deadpool is a little more practical with his use of a red suit since it’s presumably so that bad guys can’t see him bleed. That would be a big boon since they would never know if they wounded you or not. But of course that’s kind of defeated when it’s obvious from the way a person is limping, dragging a limb, or otherwise acting like they’re injured. Still, it’s a whimsical way to look at it.

Daredevil is after all the ‘devil of Hell’s Kitchen’, so it only makes sense that gets decked out all in red. It’s just too bad that Affleck couldn’t squeeze himself into the kind of skin-tight bodysuit that the character in the comics does. The red leather outfit didn’t really bring it all together that well since it was more like he was out for a night on the town in a cool but overstated motorcycle jacket.

This is the incarnation of the Flash that a lot of people have grown up with and remember. Well, at least the red costume is familiar, as a lot of the upgrades have come just recently. For instance the Flash was never armored, he just had a really tight-fitting suit. The armored look is pretty cool and a lot more practical since it allows him to take a bit more punishment when he’s in the field.

5. Devil-Tenacious D and the Pick of Destiny

This guy is just flat nasty. The things he wants to do to the guys is scary and the level of skill he has for a rock-off is something that no one in their right mind would think that they can win. But being as this is Tenacious D’s movie however it’s all too obvious that they’re either going to win or find some way to trick the devil. After all, the good guys can’t lose in a movie like this.

So he’s not all red, but he hasn’t really changed his iconic look all that much in the last few decades so he was worth a spot on this list. The friendly neighbordhood wallcrawler has been sporting the same red and blue look for a long time now, aside from the time when he decided it would be okay to take on a black suit and just roll with it. Thankfully that didn’t last too long.

This was definitely one of the more iconic ways to depict the devil in movies, and it was scary as it could be for a lot of people as well. Tim Curry is one of the absolute greatest actors to ever grace the screen, it’s only too sad now to see that he can’t perform like this any longer.

Ka-chow! Lightning McQueen has been tearing it up now for a while and kids have absolutely loved it. The red racing car has been a staple in Disney’s stable for a full three movies as well as a lot of short spots and merchandise that’s been rolled out to the willing public. As of the third movie however he took on his mentor’s old colors and is no longer a red character.

As you can see red is a great color for a guy named Hellboy. It also matches his notorious temper that comes and goes like lightning, striking hard and then fading away when he sees what he’s done.

Red characters are definitely a lot more interesting than some.