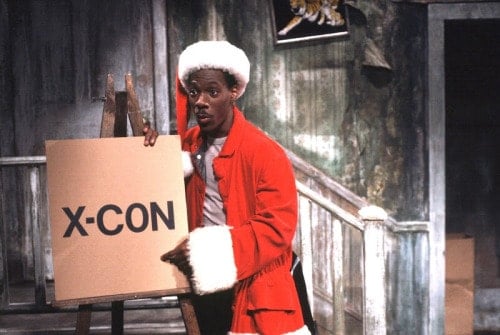 For more than 40 years, Saturday Night Live has reliably made us laugh every weekend by parodying the latest in political and cultural happenings and writing sharp, witty comedy sketches. Even though there are some recurring characters, it’s a fresh, new show each week, with a new host, a new musical guest, and new current topics to skewer. Cast members may change with the seasons, but one thing is constant: at 11:30pm (eastern time) on the sixth day of the week, when you hear the now famous line, “Live from New York, it’s Saturday Night!” at the end of the cold open, you know you’re in for some laughs.

Through the years, Saturday Night Live has aired some excellent holiday-themed skits. Some are riffs on popular movies or pre-existing media, while others poke fun at cultural institutions, and still others are with brand new characters written specifically for the sketch in question. And now with SNL skits available on just about any device, thanks to the online archive at NBC, we can watch our favorites every holiday season, or really any day of the year.

Four decades’ worth of skits is a lot to comb through, but some holiday sketches really stand out. Here are the top ten Saturday Night Live Christmas Skits.

Alec Baldwin’s short scene in 1992’s Glengarry Glen Ross is legendary, and in 2000, he parodied his blunt motivational speaker character in a scene that takes place in Santa’s workshop. ABC, he tells Santa’s elves: Always Be Cobbling, because the best cobblers will get access to the Glengarry line of power tools. If you haven’t seen the film, the skit is still funny, but if you have seen the film, it’s downright hilarious. Baldwin has been a favorite on SNL through the years, and he certainly doesn’t disappoint in this skit.

In the fall of 2014, the Serial podcast became a huge hit. Listeners couldn’t get enough of the story of Adnan Syed and how Sarah Koenig told it, which made it perfect fodder for SNL. The transition from audio-only storytelling to audio-visual storytelling isn’t seamless, but the concept is perfect, and it really hit the funny bone of Serial fans. In the skit, Cecily Strong as Koenig seeks to solve the mystery of Kris – Kris Kringle, that is, and how he delivers presents to so many kids on Christmas Eve. We see her on the phone with her protagonist and other interviewees, some of whom sound remarkably like the people involved in the Syed case, and vocally puzzling out the logistics, much like the real Koenig does on the podcast. The end result is pure comic genius.

I Wish it Was Christmas Today

A few simple instruments and a Euro-dancey drum machine sequence are the foundation of this quirky new Christmas tune, first performed in 2000 by a remarkably young Horatio Sanz, Jimmy Fallon, Chris Kattan, and Tracy Morgan. It’s catchy, it’s silly, and it’s incredibly fun to watch the actors trying not to break character. The song was so simple and so successful that it was reprised several times in the following years, but the original holds up as the best. It’s honest, rather than a parody of a past rendition, and it’s risky, since there was no guarantee that the sketch would work the first time around. And the best testament of all? The song itself was covered several years ago by Julian Casablancas of The Strokes. Now that’s clout.

BublÃ© himself stars in this three minute spoof commercial for a Christmas Duets album. It’s hard to tell what’s funnier: BublÃ©’s painfully straight man performance, or the spot on impressions of musical stars like Justin Bieber, Sting, Thom Yorke, Kanye West, and others. The only downside of this skit is that the album doesn’t actually exist.

Christmas Eve at the White House

Back during the first season of SNL, Chevy Chase often performed his impression of then-President Gerald R. Ford. He didn’t bother to make himself look like Ford, or sound like Ford, or really make fun of any of Ford’s mannerisms. Instead, Chase played Ford in one way and one way only: clumsy as all get out. In this cold open from 1975, Chase as Ford spends Christmas Eve bumbling through tree trimming and addressing the nation. It’s a single joke, but it’s consistent, and it’s funny.

The host monologues that open each show are often hysterical, and John Malkovich’s turn during the holiday season in 2008 is no exception. He invites children on stage and reads them the favorite Christmas tale, but with a definite macabre Malkovichian twist. It likely ruins the story (and probably Christmas) for the poor children, but for those of us watching at home, it’s a twisted riot.

Andy Samberg regularly did his Mark Wahlberg impression during his time at SNL, and while it’s hard to pinpoint why exactly it’s so hilarious, the bottom line is that he nails Wahlberg’s breathy, Boston-y, and slightly bewildered delivery. In this Christmas edition of Samberg’s “Mark Wahlberg Talks to Animals” series, we’re treated to more of the same: the ridiculous impression of Wahlberg promoting his career to a bunch of quadrupeds, only with a Christmas twist. The whole thing is over in under two minutes, but it’s short and sweet and terribly funny.

Dick in a Box

Justin Timberlake has been an integral part of many great SNL skits, including many Christmas skits, but for our money, his top contribution has to be 2006’s “Dick in a Box” music video with Andy Samberg. The two croon a ‘90s-style R&B ballad about giving your woman the most meaningful gift this holiday season: your manhood, tastefully wrapped. The costumes and creative facial hair are on point, and the song is worth watching several times to pick up on all the lyrics and nuances.

Few SNL alumni have gone on to as illustrious a career as Eddie Murphy has enjoyed. Back in the early ‘80s, though, he was a regular on the weekly show, and one of his most beloved characters was Mr. Robinson, a spoof on PBS’s squeaky clean Mr. Rogers. In this Christmas themed skit, Murphy as Robinson explains the wonders of the holiday as he sees it: using a Salvation Army kettle to make money for himself and ripping off kids by selling homemade Cabbage Patch Kids.

Alec Baldwin begins our list, and he also ends it. In this 1998 skit featuring a fake NPR show “The Delicious Dish,” Baldwin plays Pete Schweddy, a man who makes a very special Christmas treat. The sketch is just so over the top with double entendres that by the end, you’re not sure if they’re talking about cooking or sex. It’s all done in a complete deadpan delivery, which is a great mockery of the calm tone of NPR announcers, but that’s secondary: the real appeal here is just how many jokes about balls they’re able to make.