Home
WWE
The Top 10 WWE Superstars of All Time 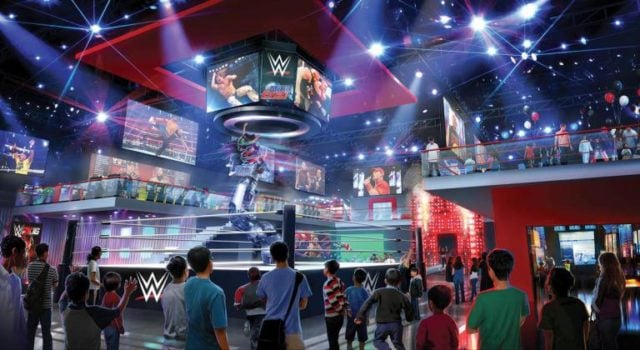 No matter the name, the wrestling fan base is made up of diehard fans and dedicated followers. Whether it’s Monday Night Raw or Thursday Night Smackdown, or even Summerslam, headlocks, body slams, and pile drivers are made all the more exciting by the dramatics that accompany it’s characters. For some, wrestling is a soap opera with less corny acting and more broken bones.

What names come to mind when you hear “WWE”? Hulk Hogan? The Undertaker? The Great Khali? Over the last 65 years, the wrestling world has produced some of the world’s most infamous and memorable entertainers. Let’s take a look at 10 of the most memorable and influential wrestlers of all time.

Dwayne “The Rock” Johnson – the envy of every aspiring superstar and every woman’s dream man. Not only does The Rock have wrestling in his blood, but his WWE career helped catapult him to Hollywood stardom.

The Rock entered the wrestling scene in 1996 by the name of Rocky Maivia. The then star, was part of a group known as The Nation of Domination. But this charismatic newcomer couldn’t be stopped. He quickly took over the group and took on the persona of The Rock. With a grandfather and father that were both wrestling champions, it’s no surprise that Johnson became an instant success.

Known as the People’s Champion, The Rock wowed fans with his eyebrows, the rock bottom, and the phrase that never gets old – “Can you smell what the Rock is cooking?” Fans couldn’t get enough of Dwayne Johnson, which transferred to his onscreen roles in movie hits such as Fast and the Furious, Scorpion King, and most recently, Moana and Baywatch.

Austin 3:16 was one of the toughest, no nonsense wrestlers of his time. His hardcore and rebellious attitude made him a fan favorite. Thousands of Americans could relate to this beer drinking and defiant dude. And it wasn’t just his attitude that attracted fans – Austin collected over 20 titles in his 14 year career in the ring.
Some of his most infamous signature moves included The Stone Cold Stunner and the Stun Gun. A host of injuries ended Austin’s career in 2003. He was inducted into the WWE Hall of Fame in 2009 and hosts the popular TV show Tough Enough as well as his own podcast known as “The Steve Austin Show.”

One of the most well-known and accomplished wrestlers in the WWE today, John Cena is known for his muscles, his love for his country, and his bombshell fiance, female Diva Nikki Bella.

Whether you like Cena or not, there’s no denying his talent and charity. This superstar has is a 16-time WWE Champion and as granted more wishes through Make a Wish Foundation than any other contributor. It’s no wonder Cena is known as “The Face that Runs the Place”. His patriotic salute at the beginning of arena entrance paired with his unmistakable theme song leaves fans shouting and females swooning.

Cena’s iconic Five Knuckle Shuffle is undoubtedly mimicked by kids around the world, as they hold their WWE replica belts high over their head and dream of being the “Censation”.

One of the few masked wonders the WWE has the offer, Rey Mysterio’s mysterious demeanor is almost as intriguing as his unbelievable acrobatic skills.

Often the underdog, Mysterio’s small stature didn’t stop him from becoming a World Champion or beating out 30 competitors for the Royal Rumble title. Standing at just 5 feet 6 inches tall and 175 pounds dripping wet, this innovative fighter used his small stature in his favor.

The star donned his mask in honor of the great lucha libre tradition, which dictates that a fighter’s mask adds to their mystery and story. It’s no doubt the tradition worked for this Mexican wonder. Not only did Mysterio gain respect from his competitors, but he became the smallest wrestler to ever win the World Heavyweight Championship.

One of the greatest showman of all time, Macho Man’s elaborate outfits were second to none. His performance both in and outside of the ring made him a fan favorite for years and one of the WWE’s most memorable characters.

Savage reigned as the Intercontinental Champion for 14 months and held two WWE Championships during his career. His unique style wasn’t limited to just his dress. The eccentric star entered the ring to the unconventional song “Pomp and Circumstance”. You might also remember his appearance as the face of Slim Jims! His iconic “Oh yeah” will go down in history as one of the most repeated phrases of all time.

Ric Flair is arguably the greatest wrestler of all time. His elaborate robes and infamous strut have been studied and imitated by many wrestlers that followed. And why not? The 16-time World Heavyweight Champion knows more than a thing or two about how to rule the ring and win over fans.

Like the mark of any true WWE star, Flair has left and returned to the ring on multiple occasions. His daughter, Charlotte, is successfully following in her iconic father’s footsteps and is already a six-time champion. Flair was the only active wrestler to ever be inducted into the WWE Hall of Fame – an honor that was granted to the performer in 2008 and is the only two-time inductee, accepting his second honor in 2012.

Not many wrestlers are as hated as this man. Before he took on the role of Stephanie McMahon’s husband, the man known as The Game, proved he could hang with the best of them. Winning 14 WWE World Heavyweight Championships, the 1997 King of the Ring Title, 2002 Royal Rumble, and the Grand Slam Champion.

Part of WWE fan hatred toward Hunter Hearst Helmsley (Triple H) was his deception of helping Randy Orton (the Viper) steal the WWE Championship from Daniel Bryant in 2013’s SummerSlam. This resulted in the inception of The Authority – a villainous professional wrestling stable run by none other than Triple H and his wife, Stephanie McMahon. The group welcomed other disliked names in the game such as Seth Rollins and Kane.

Known best for his demonic entrance, his large brimmed hat and long trench coat, the Undertaker rolled his eyes back into his head and delighted fans with his darkness. Towering over his opponents at nearly seven feet tall, the Undertaker entered the ring in 1990 and left his mark across the association.

Some of the dead man’s most notable accomplishments include six-time tag team title holder and World Heavyweight Champion. But the Undertaker made history with his Casket Match, Buried Alive Match, and Hell in a Cell. The names speak for themselves.

Gaining his name due to his enormous size, Andre Rene Roussimoff was born in France and journeyed to the United States in 1971 where he met and was quickly signed by Vincent McMahon.

Standing at 7 feet 4 inches tall, he was one of the largest wrestlers in WWE history, only second to Giant Gonzalez who stood at a staggering 7 feet 8 inches. Andre the Giant captured the hearts and attention of the American audience due to his seemingly docile demeanor but unmatched strength and power.

Some of the Giant’s most memorable moves were the Bear Hug, Head Butt, and the Big Splash. Andre held a 3,000 plus winning streak that was ended by none other than Hulk Hogan. Andre died in his hometown in France at the age of 46.

No WWE superstar list would be complete without Hulk Hogan. Whether you love him or hate him, this star with the handlebar mustache and recognizable red and yellow costume is one of the most widely known stars in the business.

Hogan was a professional at capitalizing on all the key elements of stardom – charisma and controversy. Hogan found himself involved a WWF steroid scandal and left the limelight for several years before returning as part of the WCW and the New World Order. Hogan was unrecognizable to some fans as he died his hair black and ditched his red and yellow singlet for all black.

Controversy has always surrounded this superstar, which has made him one of the most popular WWE characters in history.

Each decade of the WWE sees the introduction of up and coming stars, the return of some classics, and the retirement of others. No one knows what’s next for the world of WWE or its cast of intriguing characters, but you can be sure that fans will stay tuned to find out!