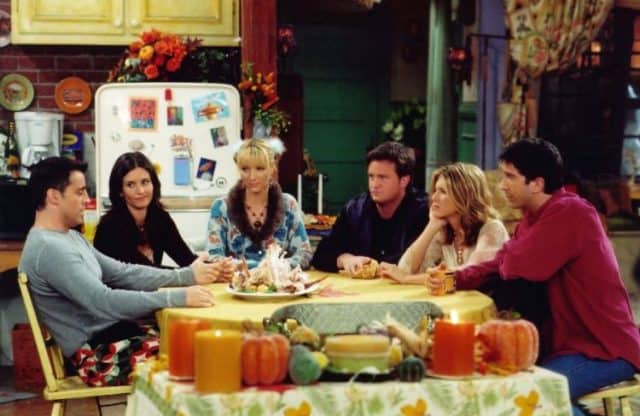 The holiday season is upon us and who better to spend it with than family and Friends.Â By Friends I mean the lovable gang we spent 10 seasons getting to know, loving, laughing with, and enduring multiple break-ups and one, unforgettable “break” between Ross and Rachel. There were so many memorable episodes, but here we’re going to look back on 7 of the most entertaining and classic moments in Friends holiday history.

You have to love the twisted, and sometimes bizarre, sibling relationship shared by Ross and Monica. Ross, a slightly narcotic paleontologist, and Monica, an equally narcotic clean freak and germaphobe, also share a competitive streak. This was never more apparent than during the Geller Bowl of Season 3. What was intended to be a friendly game of Thanksgiving football turned into another Geller head-to-head, all out, throw down brawl. And the prize? The Geller cup — or what the rest of us clearly saw as a troll doll attached to a 2 x 4 piece of wood. The “trophy” was buried during Gellar Bowl VI where Monica broke Ross’ nose. Game highlights included Rachel’s despicable display of athleticism and Chandler and Joey’s battle over a beautiful foreign onlooker.

This was another shining example of the strange dynamic between the Gellar siblings. During Season 6, the duo capitalized on the opportunity to dance at Dick Clark’s New Year’s Rockin’ Eve. Determined to make it onto a dance platform, both Monica and Ross throw themselves in the faces of the New Year’s bash staff. When their efforts are thwarted, Ross suggests they break out “the routine” — a ridiculous choreographed dance from their childhood. After clearing the dance floor, Ross and Monica perform flips, dips, and outdated dance moves including the sprinkler and the swim. No routine would be complete without a grand finale. In this case, Ross leaping into Monica’s arms.

Anything involving Brad Pitt is a win from the start, at least for most female fans. During season 8, Monica invites Will Colbert (played by Brad Pitt) to Thanksgiving dinner. Will, a former “fat kid” from high school, is harboring a secret hatred for Rachel, who was part of the popular crowd that ostracized him. Rachel doesn’t remember Will, which only adds to his disgust. The plot thickens when Will (Brad) reveals that he and Ross started an “I hate Rachel” club in high school. Rachel is appalled to discover Ross was part of the club. Her shock turns to horror when she finds out Will and Ross spread a rumor that she was born with “both girl and boy parts”. For the remainder of the episode, Ross tries to smooth things over with Rachel while Phoebe insists Will take his shirt off — we get it, Phoebe, thanks for trying.

We can all relate to that over-full Thanksgiving feeling. Included in the same Brad Pitt episode, fans are delighted to see Phoebe’s maternity pants double as Joey’s Thanksgiving pants. To save on waste, Monica announces she won’t be cooking a large Thanksgiving turkey. Joey is horrified and promises Monica that if she cooks a turkey, he’ll eat the entire thing himself. Monica is doubtful but cooks the 20-pound bird anyway. You might remember Joey snacking on chips to “warm-up his stomach”, much to Monica’s dismay. As Joey struggles to finish the turkey on his own, he excuses himself for a quick wardrobe change. It’s hard to say which is funnier — the fact that Joey’s wearing maternity pants or the pant’s horrifying pattern.

5. The One with All the Thanksgivings

Some of our favorite Friends episodes are ones that flashback to times with the gang that we missed. This episode from season 5 includes a competition over who can stake claim to having the worst Thanksgiving ever. Ross is in the process of divorcing his now-lesbian partner Susan, Phoebe recalls a past-life and the secret about Monica’s worst Thanksgiving is revealed. On a visit home from college, Monica attempts to seduce Chandler as payback for calling her fat. Her plan is foiled when she accidentally drops a knife that severs his toe. Instead of bringing the toe to the hospital for reattachment, Monica brings a carrot. Return to present day – Chandler is upset to learn the truth about why he’s without a toe. Monica feels awful and tries to cheer him up by putting a raw turkey on her head and dancing around. Chandler not only laughs but for the first time in their relationship, tells Monica he loves her.

It’s important for children to know and understand where they came from. Holidays aren’t just about presents, or at least that’s what parents tell their kids. During season 7, Ross wants to teach his son Ben about their Jewish heritage. But Ben, being a typical kid, is just excited for Christmas and Santa, showing no interest in much else. Ross finally gives up and decides to rent a Santa costume to make Ben happy, but it’s too late. With no Santa costumes available, he arrives dressed as the “Holiday Armadillo” — representing Santa for “all the southern states and Mexico”. Ben is unimpressed at first but soon becomes interested in Hanukah and the Festival of Lights. Everything’s going as planned until Chandler arrives dressed as Santa Claus. Ross kicks him out but not before Monica asks Chandler to keep the costume “for later.”

We’ve all been there — you’re dating someone for a few months, things are going well, and then someone wants to have “the talk”. They want a label. This happened to Ross during season 8 and we’re all there to witness it. After taking a Christmas photo in front of the tree at Rockefeller Center, Mona proposes they send it as a Christmas card. Ross tries to explain that a Christmas card is a premature step in their new relationship, which prompts Mona to ask, “Where is this relationship going?” Ross fumbles over his words and inadvertently ends up giving Mona a key to his apartment. The entire conversation is awkward and uncomfortable but highly entertaining for those of us who aren’t Ross! No holiday would be complete without Phoebe’s quirky stories, Monica’s cooking and Joey’s poorly-timed and misplaced comments. Thanks for the memories Friends.