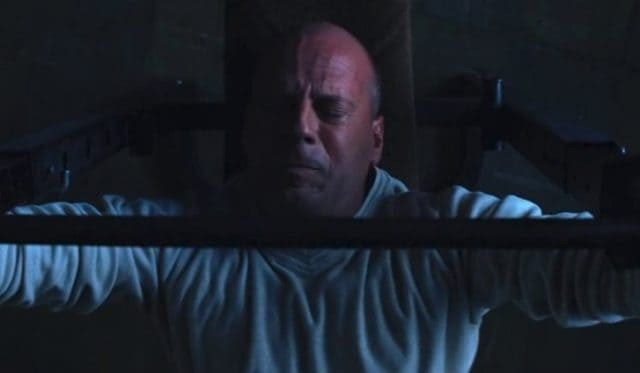 Performing the bench press in the movies looks so easy doesn’t it? You see people with weights stacked on either end and you get to thinking that you might be able to do that, it’s all a matter of believing in yourself right? Well put that notion to rest since unless you’re a professional lifter or have at least been doing it for a while the bench press isn’t something to kid around with. Yes it’s a simple lift, but think about your position. If you put more weight on the bar, which typically weighs about 45 pounds on its own, and you might find out just how hard it really is to push back up from a supine position.

Take it slow if it’s your first time, the movies tend to use fake weights a lot.

Higher Learning is kind of a glamorized look into how racial tensions take place in a college setting. It gets pretty brutal at times but in this scene when you hear the Nazi-loving guys talking to each other about what kind of America they’re living in and are getting to know Remy you can see their powerhouse and resident tough guy on the bench press. He’s played roughly the same role in every film so far, the big, muscular tough guy.

So Debbie doesn’t believe in Freddy? That’s okay, Freddy believes in her. Just like most scenes in this series Freddy comes up with a truly gruesome fate for the fitness-obsessed Debbie, pushing down on the bar so hard that her arms break and reveal what’s underneath. I’m not sure what’s worse, getting turned into a giant cockroach or having to shrug out of your skin when you get glued to fly paper.

This is one of those cases I was talking about when someone thinks that something is easy just because everyone else is doing it. In this film you’ll notice that Marcus is able to shrug the weights off of one side of the bar to get up. If you’re lifting for real you typically have clamps on either side of the weights so that they don’t move. Plus, someone would have come over and help him in the real world.

I guess that’s one way to relieve the stress of a horrible childhood, which according to the narrative during this scene was something right out of a nightmare. You almost feel sorry for this guy when you hear what his grandmother is threatening to do to him, and then when he gets going with the carnage he unveils that feeling goes away in a big hurry. Killers might need sympathy too but it’s hard to muster when you see what they do.

The best part about this is that he just keeps adding weight and yet he can still push it up. This guy’s strength is simply amazing, but don’t go strapping paint cans and anything else you can find to the bar just yet, because this is something that no one should be trying unless they’re good and ready.

Trust me, the bench press is a great lift, but you need to be ready for it.