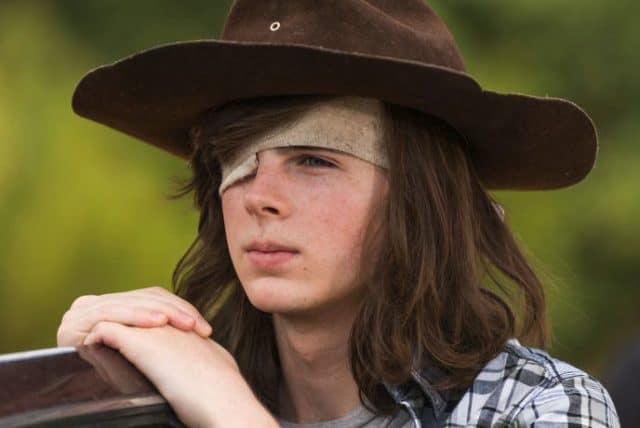 Carl Grimes is the character that joined the show when Chandler Riggs, the actor who played the role was just a kid. The character was an annoying kid, but we’ve watched him make the evolution from the awkward boy to a real tough young man in “The Walking Dead” series. The son of the main character, Rick Grimes, we pay tribute to the character who recently died on the show, much to the chagrin and dissatisfaction of hard core fans.

Here are the five top Carl Grimes scenes from the series.

Carl stands quietly listening as Negan goes on his rant, until he begins hurling insults at him. Grimes maintains his calm demeanor despite Negans efforts to rile him. Carl explains that there are families with children inside, as though that would move the heartless Negan. He offers himself as a sacrifice and if somebody had to die, Carl told Negan that he would be willing to become the one to do so, in order to end the violence. He confronts Negan and asks him if this is who he planned on becoming in a tense scene that seems to cut to the quick of his tormentor.

This is one of the more intense scenes in which Carl almost gets raped by the enemy holding a knife to his throat as Rick is held down with a gun at his temple. Things get really crazy when a weakened Rick bites the throat out of his captor and barely stops the would be rapist. They wipe out every one of their captors in one of the bloodiest scenes in the history of the show.

It’s a close call for Ron who is spotted by a knife wielding assassin. He runs for the compound but he’s no match for the killer that is quickly closing the gap between the two. There isn’t enough time for him to make it, then Carl saves his skin by sniping the pursuer just before he is close enough to take Ron down.

How Carl loses his eye

This is the intense scene where Carl and his father and the rest of the group are walking through the middle of a group of zombies. When one of the boys in the group attempts to shoot Rick with a gun, the shot goes into Carl’s eye. This is when he begins wearing the iconic eye patch that became his signature.

This is the final scene where Carl lies in the dark, barely moving. Rick, knowing that it’s serious walks slowly to his son and pulls the bandage back to see the bite that would end the existence of his son as he knows him. This is one of the most riveting scenes in the movie and the father and son look into one another’s eyes. Each knowing that this signals the end of their journey together.