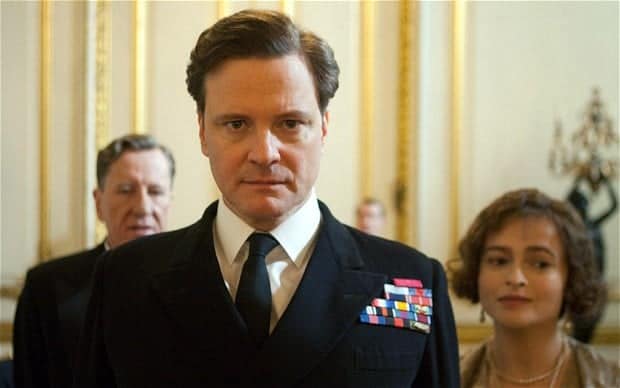 Colin Firth has been kind of on a rollercoaster of success over the past several years when it comes to being noticed and then just lost in the shuffle it feels like. He’s a great actor but he’ll do something wonderful and then kind of lie back for a year or so. Then he’ll show up again in something appealing and then fade back. It could be that he doesn’t want to stress himself out doing too many movies or it could be that he doesn’t always find parts that make him stand out so much. I didn’t add in the second Kingsman movie on this list simply because I believe the first one is where he was at his best and while the second was pretty good it still didn’t have all the flair of the first.

He’s fun to watch so long as he has a dynamic part to play in the movie.

King George VI was not a meek or even weak man, but he had a serious problem with public speaking. He would stammer horribly, and this was a problem for a monarch, as his people expected him to be strong and vibrant in his speech, not meek and hard to understand. With a speech therapist that managed to teach him in a very unconventional manner however he was able to give one of the most rousing speeches of his life when he declared that England was at war.

Cedric is a loving but bumbling father. Initially his family absolutely needs Nanny McPhee, though as time goes on and the children learn how to behave, be responsible, and help their father out, they begin to see just what it means to be a family. Cedric, for his own part, begins to understand what it is to be a father and to have fun with his children rather than worry about what they’re doing at any given time.

It’s one thing to know that you’re going to have a child, it’s another thing to not know if the child is yours or not. The whole idea of having sex isn’t such a bad thing but when a woman gets pregnant and can’t figure out who the father is it tends to open up a can of worms that can get pretty messy if it isn’t handled right. Thankfully Mark and Jack came to terms with one another for the sake of Bridget and the child, who turned out to be Mark’s.

A back and forth kind of spy movie in which one person is deemed to be guilty of espionage and then another is thought to be makes for a very interesting film, but this movie was plagued by a lot of people stating that it wasn’t nearly as good as the book. That seems to be the case with a lot of novels that get adapted to the screen, but at least this movie had a very well-rounded cast.

Galahad is one of the top Kingsmen in England’s secret service and this clip above proves it without a doubt. Of course he’s only taking on street thugs, but later on when he takes on a church filled with crazed individuals that are under the effect of the movie’s antagonist he’s an absolute wild man.

Colin Firth is a better actor than he gets credit for at times.