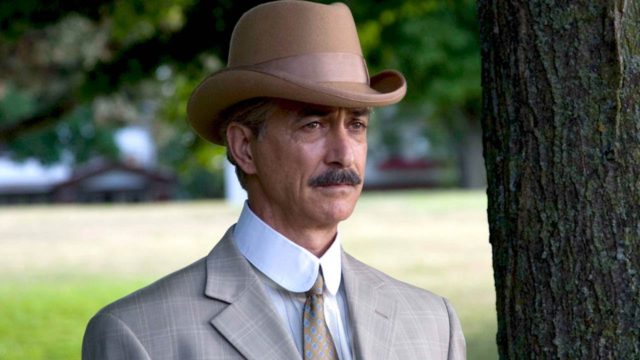 This is another actor that is great in his roles but can be made to disappear behind bigger and younger talents. This doesn’t mean his part is any less important, but it does mean that he can play the supporting role without much trouble. In most role he plays he steps into the character without any trouble and can make you hate him or love him in equal measures. The villains he plays are despicable yet somehow able to be pitied, while the dramatic or even heroic roles he plays are just downright heartwarming.

The kind of power that Noah Vosen wields is not only dangerous but it has the capability of turning good men into monsters. As the director of the CIA Vosen has almost unlimited potential at his fingertips and can employ assets any time he needs to. The one obvious thorn in his side is Jason Bourne, who simply refuses to go away and can do maximum damage with very little effort. Vosen is able to track Bourne down, but containing him proves to be another matter that eventually proves impossible.

You can almost feel like the father in this movie, played by Strathairn, is not to blame, but could have done something more to prevent his remaining daughter from going insane. Granted, he cheated on his wife while she was still alive, and kind of alienated his daughters in the process, but overall he was trying at the end and eventually did kind of reap the rewards for his unintended neglect. At least wait for your wife to pass on before finding another woman to share your bed.

3. A League of Their Own – Ira Lowenstein

He was definitely one of the unsung heroes of this movie. The women had it rough just getting into the league and attracting enough viewers to make it worth it. But Ira had to be diligent and steadfast in keeping the league going as he took on the entire responsibility of its operation. Lo and behold years later the ladies were offered their own place in the baseball hall of fame, as they so richly deserved. And Ira, the man who made it all possible, was rightfully chosen as the man to cut the ribbon and invite them in.

It takes some real skill to play the part of a blind man when you’re not disabled in any way. Strathairn made this look so believable that it’s a wonder that he wasn’t seen as the most important part of the crew. His technical genius and his wit were more than enough to make him a reliable and charming part of the film.

And we save the worst for last. When I say worst however, I mean one of the best performances that Strathairn has ever put in. It’s so easy to hate Joe simply because he’s that malicious and, let’s say it, he does something with his daughter that is best not spoken about. Dolores has every right to want to see him in jail, but she thinks up something far more devious and much more lasting. It’s kind of safe to say that no one really laments the loss of Joe St. George.

David Strathairn is a very good character actor. He knows how to get you to turn against him or root for him. That’s why he’s probably one of the most underrated actors as well.