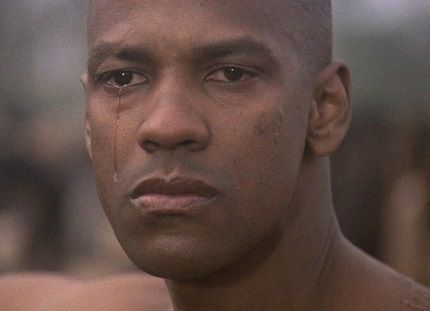 Denzel Washington often plays such a strong role in movies that you don’t fully expect him to cry. If he does then it seems like it should be a complete breakdown or just a lonesome tear trailing down his face as he remains stoic for the most part. And to be honest that’s what a lot of his crying scenes are. He doesn’t always blubber like a big baby or even slowly sob or just lose complete control. He’s almost always the type that swings from one extreme to the other, staying silent and letting the tears fall or breaking down because something in his past is just that horrible that he can no longer contain it.

He goes all in on his roles, which is great.

Creasy is a man with a dark, dark past. He’s done things that he doesn’t think God can forgive him for, and he hasn’t shied away from them. However in the darkness with his own thoughts he can’t help but think that he deserves a penance that might never come. It’s only when a suicide attempt fails, and a young girl shows him it’s okay to keep living, that he finds he can take that next step forward.

Based on a true story the Hurricane, Ruben Carter, was wrongfully convicted of murder and spent 20 years in prison before finally being released. The real Rubin Carter was blown away by Denzel’s representation of him, which is awesome since so many individuals that are portrayed in films tend to think that there was something off in the actor’s rendition of their life.

Alonzo isn’t a good person. He might have been once but a life spent as a detective willing to do anything to get what he wants and needs tends to turn even a decent man into someone they barely recognize. It’s only when he realizes that he’s lost just about everything that he feels even a shred of remorse. The problem is that if he was forgiven things would go right back to the way they were.

What would you do to get your child the care they needed? How far would you go in order to make sure that they were taken care of? John didn’t hesitate when it was made good and clear that hospital would allow his boy to die because his parents couldn’t come up with the needed money for his operation. I feel confident in saying that a lot of parents might go ballistic at this.

The Civil War was anything but civil in terms of how the men were treated during the conflict and aside from it. Tripp was whipped for going AWOL, when in truth he was seeking out a new pair of shoes to replace his old, worn ones. It’s difficult to fight in any war when your feet are aching, you don’t have the right supplies, and you’re seen as somehow lesser than the men you share the same mud with it.

Denzel knows how pull at your heartstrings.