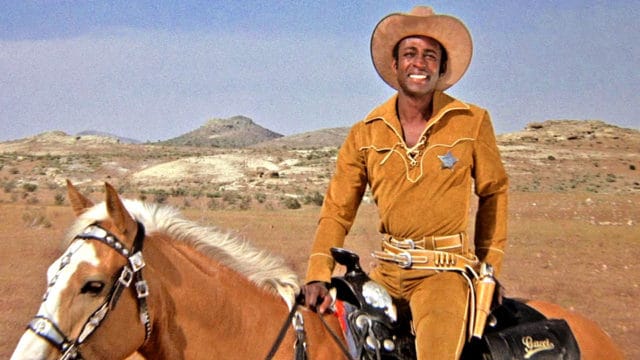 Lawmen in movies, be they sheriffs, marshals, rangers, or anything else, always seem to have a difficult time of getting people to do what they need them to. The average movie sheriff is a lot like a private citizen with a small amount of authority and a gun. They get pre-empted by higher authorities a lot of the time, and they usually have to dispense justice in a way that allows them to step outside of the law for a brief moment. In any case they seem to be one of the lowest people on the ladder when it comes to law enforcement, unless the law in their area begins and ends with them.

Here are a few notable movie sheriffs you might recall.

Blazing Saddles took a lot of heat for the many racial slurs and attitudes throughout the film, but none were quite as virulent as the attitude leveled towards the new sheriff in town, especially considering that he was not what they expected. The hilarity took an early start though when he took himself “hostage” and shortly disappeared into the sheriff’s office where he could only shake his head at the mass stupidity of the townsfolk.

Woody had a lot to deal with then the new toy on the block rolled in. He was the big man in Andy’s room, so to speak, before Buzz came along. When he started to lose his spot to the space ranger he might have reacted a little differently if given time to think and actually get to know Buzz, but let’s face it, that wouldn’t have made for much of a movie. The two of them kind of had to square off just to get to know each other.

Teasle makes the list for one reason, he’s not easily intimidated. He’s not even close to being at the same level as John Rambo, but he still doesn’t give up. The only real issue is that he made an assumption about Rambo when he first saw him and allowed that view to taint his further dealings with the man. If he’d let Rambo get something to eat and maybe a good night’s sleep he wouldn’t have had to explain why half the town went up in smoke.

A lot of us weren’t used to seeing Stallone in a position where he was anything but in charge. He’s always been the independent guy that knew what to do and when to do it. In this film though he’s kind of at a loss for a good part of the movie until he finally stands up and takes the matter to the crooked cops for a frank discussion punctuated by an occasional blast from his shotgun.

The secret of who the Stranger was kind of slid right in front of you like a clue that’s been hidden with a see-through veil, but until the last scene you really don’t feel vindicated in saying who it is. Clint Eastwood wasn’t a good guy in this film, but was far from being the worst person around. He took his vengeance in the only way possible, by giving his hatred back to the people that had called for his death. There are a few theories about who he really is, but the most popular is that he and Jim Duncan are one and the same.

Movie sheriff’s are often a tough lot. They’re not always the brightest or strongest, but they’re usually pretty tough.