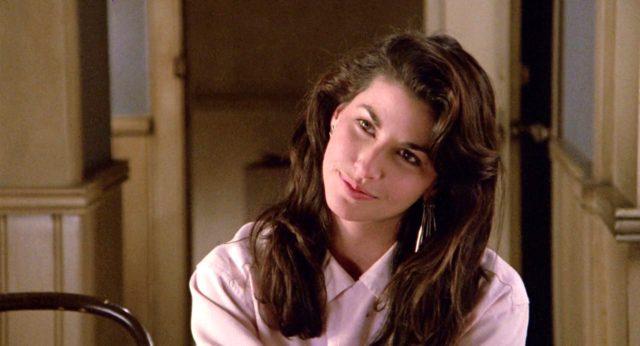 If you don’t remember Gina Gershon all that well it’s probably because aside from being a very pretty face and a lot of attitude, she hasn’t been in too many memorable roles. She can act, she can play a sultry and defiant role, but much of what she does seems like its bound to remain on the surface of one’s mind and never really sink in. She might play a damsel in distress or a background character that seems destined to go somewhere, but thus far in her career she doesn’t appear to have done much of anything except the same type of role with a few moderate changes thrown in for kicks.

It might have seemed like she was about to be a big part of this film but the development of Coral didn’t go beyond a few interesting yet ultimately pointless scenes. She was a love interest for less time than it took to realize that the two male leads were just trying to rev each other up, and then she was gone. In fact it’s kind of safe to say that if she hadn’t been in the movie at all it would have ended up the same way.

Now this role seems tailor-made for Gershon. The character is sassy, defiant, and downright sexy. Some people might have been a little shocked that she and Jennifer Tilly had a rather steamy love scene between them, but in the 1990’s it was all about breaking rules and doing whatever was taboo to get attention. The gritty and violent nature of the film didn’t hurt either.

Despite her role she felt more like a bit-player in this film, a trophy character if you will. Gerson has the chops to take on a fully developed role, but in some films it’s almost like she’s there and gone in almost no time at all. She serves very little purpose in some films and in others she’s there just enough to tease the audience and then she’s gone.

Believe it or not she is probably one of the most memorable characters from this film. Her ungrateful attitude kind of steals the show apart from the fighting scenes and the manner in which she and the lead character finally fall head over heels for each other is almost as climactic as the final battle. if you loved the movie and those before it then apologies, but Gershon was about the only saving grace in this film.

Once again, this is a role she was seemingly born to play. The difference is that in Face/Off Gershon was at her best, and it showed. In her role as Sasha the actress was simply on point and didn’t skimp on a single line or mark. In fact, if it needed to be said, this would undoubtedly be the most defining role of her career to date.

Don’t feel too bad if you have to wrack your brain to come up with a memory of Gina Gershon. She’s had her good and bad roles, but more often than not she’s been stuck in mediocre movies that get little if any real play.