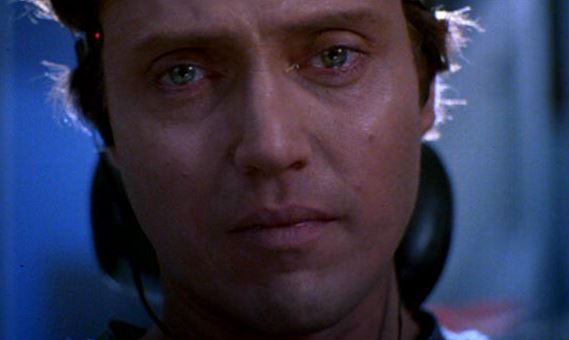 For such a quiet guy Christopher Walken can go psycho in a split second. It’s part of his charm though, he can just pour on the crazy in a short amount of time and then go right back to being Mr. Smooth soon after. That’s the kind of guy you normally don’t know about when you meet them but you can easily understand is not boring in anyway. Every role he seems to have that quiet calm until the right moment when he needs to snap, and then you tend to sit back out of habit since it’s so in your face awesome that you kind of have to take a quick second to readjust and get used to it. And then, like I said, he goes back to being quiet.

That’s what makes him so awesome.

Johnny had a great life all planned out with his girlfriend and would have been just as happy as is humanly possible, until he went into a coma as a result of a car accident and lost five years of his life. What he gained however was the ability to see a person’s innermost secrets and possible future by making contact with them. Through this he finds that he has the power to change those probable futures.

Yelling is basically what he does in this film since he’s a mercenary that’s sent to America during the Revolutionary War to teach the colonists a lesson. Unfortunately he loses his head and becomes an undead specter that is summoned night after night to collect the heads of those that he is called upon to silence. In other words he’s little more than an agent of death.

Former mob boss Charlie Bartlett is no one to mess with, but try telling that to a bunch of young, cocky college kids who think they’re not going to pay for what they’ve done. Not only do they kidnap him to try and use his connections to find the sister of one of their group, but they cut off the guy’s finger as well in an attempt to show him how serious they are. Bad move, suicidal move.

Clem is probably one of the best characters in this film because he’s just that kind of quiet awesome that the movie needs. He doesn’t talk much but when he does you get the idea that you should listen. Plus this little monologue from the movie is one of the most remembered and loved lines in the entire film. Without Walken the audience might have had to stare at Joe Dirt and Brandi for most of the time. Meh, not a terrible idea on the latter half.

Who knew that alien encounters could be hereditary? Writer Whitley Streiber has been seeing aliens all of his life but he just started realizing it when they started showing up again at his home to watch him. Throughout the film he tries to rationalize the phenomenon away but eventually comes to understand it and realize that it’s nothing to fear.

It might startle some people, but Christopher Walken yell means things just got real.