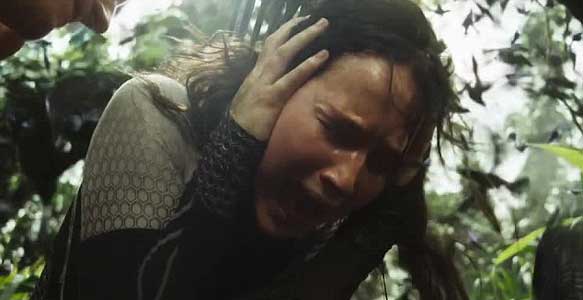 Nobody likes to see anyone crying in movies and yet some actors, like Jennifer Lawrence, do it so well in so many ways that you can’t help but be mesmerized at times because they’re so good. She can cry when she’s mad, sad, angry, or anywhere in between and make us all feel that she’s going through some very serious stuff right now that a lot of us might not understand. She’s been in some rather ho-hum movies in her career but she’s always put forth a valiant effort to make sure that what she can affect within the film is felt by the viewer.

Actors can’t do everything on their own after all.

You’re essentially on your own, in the woods, doing your best to survive so that you can represent your district for the sadistic pleasure of a ruling government body. That’s a nightmare in and of itself, but when you find someone that you feel you can trust and they’re suddenly taken from you the pain and the sorrow tend to mount up and do a serious number on your emotions within a few seconds of each other.

So it was bad enough that she was made to believe that her pod and her fellow passenger’s pods were the only ones that malfunctioned and opened up. But when it’s revealed that he woke her up I can just imagine that she’d be more than a little distraught considering that this would be a death sentence since they’re still far enough out from their destination that surviving the trip would be impossible.

She’s flat out manipulative and downright nasty in this film and yet when she’s called on it her feelings come in a silent torrent of tears that make her look as though she’d love to rake her nails down Adams’ character’s face just for the temerity of making her feel something. Folks that act this way are those that are seriously repressed sometimes and don’t know how to deal with real emotions.

Having a life where the people you count on to cheer you on only drag you down deeper and deeper would wear on anyone, but Joy somehow keeps going through all the nonsense and all the mess that is created when her half-sister and her father both try to hamstring her business. She doesn’t sit back and cry about it, well she does cry a bit out of frustration, but she goes right to the top and calls out those that have been doing her wrong behind her back. That’s how you get business done sometimes, getting right in the face of those that want to drag you down and letting them know what’s up.

Tiffany is not a well person but she has her charms and her good qualities. She happens to love Pat for instance when he’s just a much of a mess as she is, and that counts for a lot. The only trouble is that during their dance competition when he goes to tell his ex-wife that he’s over her Tiffany interprets this as his trying to get back together with her and runs off. At least he listens to to his father and goes after her without hesitating.