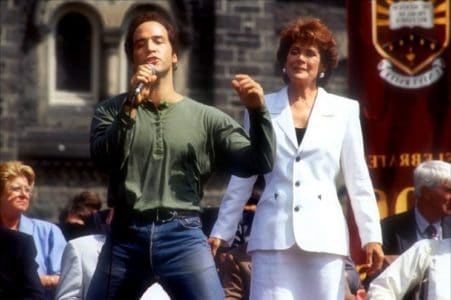 Jeremy Piven really looks like the kind of guy that would take his time to give you the most sarcastic answer possible to one of the most innocent questions or statements you could think of. He’s been known as the guy in many movies that will be completely acerbic and not care at all about the feelings of the others around him, but he’s also been seen to be all heart even when he’s being kind of a jerk. That’s the wonder of his person is that he can seem like such a pain in the backside but look good doing it. In terms of his roles in movies he’s kind of the guy you either want to avoid or be on good terms with.

Here are a few of his best roles to date.

He’s a straight up jerk in this film but he’s also kind of a genius since he’s a showman and he’s a highly skilled individual that can actually fling a playing card so hard that it can cut someone as Common’s character figured out too late. It’s not something that makes him a great fighter or anything other than a talented individual, but it’s still pretty cool.

This is one of the roles in which he is the obvious good guy that just wants to make the world a better place. He’s not perfect by any means but he wants to genuinely help the case and make the gun companies accountable for the fact that they have turned a blind eye to the carnage and destruction that their hands off policy has caused in the lives of so many.

Here Piven is that unique guy that stays in college long past the time when he should have been gone and yet is such an inspiration to others that people couldn’t bear for him to leave. He’s the type that throws a party when he knows it could get him in trouble, just so that he could go out with a bang. Â As a college man he’s about as funny as he’s been anywhere else.

Jeremy Piven has the gift of gab and there’s no denying it. He could possibly sell a block of ice to a person living near a glacier in Alaska and convince them that they’re getting a good deal. Or at least his character could. The type of salesman it takes to accomplish the most impossible sales in the world is the role that Piven seems born to play.

Of course you can’t really expect Piven to play the good guy all the time. He’s been many things but one of the best roles has been the bad guy in a feelgood college movie like Old School. Here he’s just scum, the kind of guy that looks all squeaky clean on the outside but is about as corrupt as you could imagine on the inside.

Jeremy Piven is a great actor and doesn’t always get enough credit, but he seems to find a way around that.