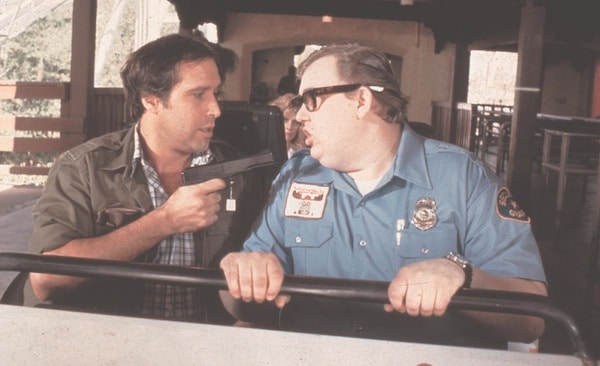 I’ll fully admit that finding yelling scenes for John Candy was actually kind of hard to do. It wasn’t that there weren’t enough to pick from, it’s that there are so many to be found in so many great movies. This guy almost never had a movie that was so bad that you wouldn’t watch it at least once. During the peak of his career he was a laugh riot from start to finish, and yet he could still pack in a good amount of drama in his movies to make it worth seeing for the acting as well as the comedy. John Candy was one of the funniest guys in the business and could make you laugh with just a look, or a well-timed yell.

You went too soon sir, but you left behind an awesome legacy.

On one hand it’s hard to believe that he didn’t have a bigger role in this film but if you look at it he wasn’t just a bit character either. There was a lot of talent in this film and to be sure that everyone got screen time it had to have been difficult to really insure that everyone was included. What time he did get, and there was a lot of it, he was just flat out funny.

Out of all the movies I’ve seen with John Candy this is one that he really got downplayed largely because his role wasn’t that big and because he was acting opposite Chevy Chase. It seems that anyone that had act with Chase had to contend with his larger than life ego at times just like Bill Murray did in Caddyshack. And yet there have been about four vacation movies, five if you count the stinker that Ed Helms did.

He’s like a cuddly, furry counterpart to Chewbacca. He’s half man, half dog, a Mog. Spaceballs was all about slapstick humor and unrealistic comedy, which was awesome. Of course in real life his foot would have been crushed and probably already severed from his leg. But the way it was played off in such a cartoonish manner was simply awesome.

As I’ve read this scene took a lot out of John Candy since that was really him under the door apparently. The bear bouncing up and down managed to crack a few of his ribs making it hard to go on. So it’s possible that him yelling ‘uncle’ isn’t all fake. Thankfully the bear was well-trained and knew how to respond to prompts but this had to be a hard scene to film.

So what flashes before your eyes in that moment when death is apparently imminent? For Steve Martin it was the devil apparently. Â This comedy was one that pitted the two men against each other and then together against the world in many cases as they attempted to make a cross country trip in an effort to get Martin back home to his family.