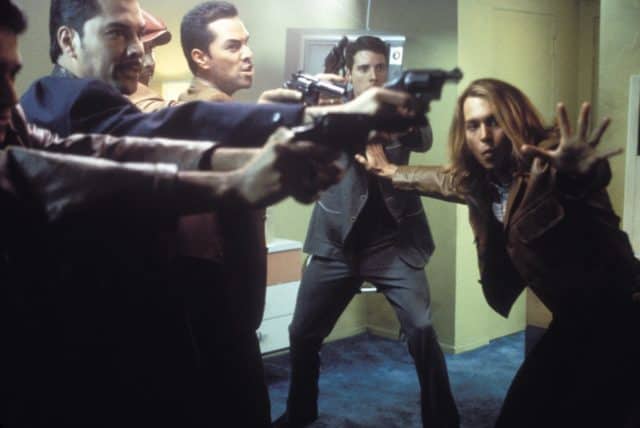 Johnny Depp is a chameleon when it comes to yelling, not so much because he has a different yell every time and for every moment, but more because he can make it look so different with each character. If you haven’t noticed he’s one of the guys that can create a character from seemingly nothing and make it something that you’ll remember for years to come. No matter if you like him or not his level of talent is so great that he’s become an icon and a legend in his own time and he still has a lot left in the tank. Since his youngest days in Nightmare on Elm Street and 21 Jump Street he’s been a good actor, but he became great somewhere along the line even though he seemed to disappear for a while before surging back with a truly impressive run that had its ups and downs but has still elevated him to his current status.

If you can’t guess what number one might be then you need to watch a few more of his films.

Based on the real story of George Jung and Pablo Escobar this movie was disturbing on many levels but thrilling on many others. It was kind of a comeback film for Depp thought no one likes to admit this it seems. From a certain point he started getting back into the public eye and was on a roll for quite a while. In fact you could say that he still is to be honest.

This one hits close to home since anyone that’s ever written a full-length novel should know what it’s like to get into your story on a level that seems awfully scary at times. If you don’t then lucky you but honestly getting into a book you’ve written on this level is something that I don’t recommend to anyone. The moment your book becomes you and vice versa is the moment you’re lost.

I remember watching this as a kid and wondering just who in the world would find this entertaining. Lo and behold I came across it as an adult and just had to watch it again to see if my memory was just as good as it seemed. Turns out it was, but somehow I got a little more enjoyment out of it this time. Nostalgia does a wonderful thing for a lot that’s been forgotten.

The Mad Hatter has to be one of my favorite Depp characters even though he’s so creepy looking. He only gets worse though when he gets mad and starts to spout gibberish. As a character in the story he’s intriguing, but as a person wearing makeup he just looks downright scary. Thankfully I like to embrace the crazy side of life so he’s more appealing for that simple little fact.

1. Pirates of the Caribbean

I couldn’t just pick one Captain Jack yell so I had to find a clip that had a lot of them compiled into one long showing. Among all of Depp’s characters this has to be my favorite since he’s nuts but he’s not so done up and overdone that he looks like a marshmallow with eyelashes. Â Sorry Hatter.

He has only a few yells, but he uses them a lot differently per character.