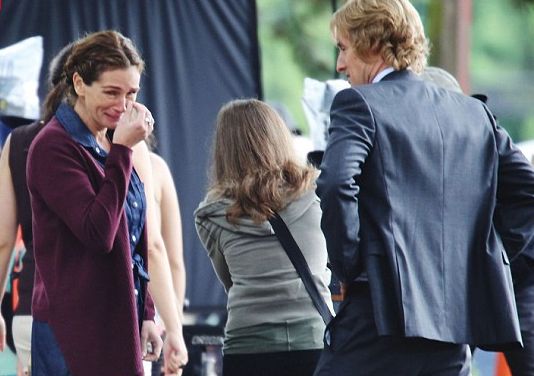 No one really likes to see when another person cries but some actors do it so well that it’s hard to distinguish when they mean to do and when it’s just an act. Anyone who knows Julia Roberts well enough should be able to tell, as with the picture above this seems rather genuine. But the woman is one of the best when it comes to the slow, moderated crying spell that creeps up and eventually overcomes the scene. Her eyes water, her lips tremble, and eventually one or two spill over, and then that’s it. She becomes a hitching, crying mess that her character is intended to be unless she pulls it back and restrains herself as the part dictates. She’s one of the best in the business for a reason whether people like her or not.

But just like anyone, it can be hard to watch her cry.

She and her best friend set a time limit in which they had to meet someone and get married, or they would end marrying one another. It might have worked if her friend hadn’t met someone that he fell madly in love with. Unable to cope with this, she then decided to try sabotaging the wedding only to discover that her friend will always love her, but in a much different way than she expected.

Shelby is about as happy as any young southern woman could be, right up until she suddenly inexplicably gets so very sick that she can barely take care of herself some days. She does what she can to take care of herself but eventually her condition continues to worsen, until finally her body simply gives out, and her family is left with nothing but fond memories.

Being a stepmom is one of the hardest jobs on the planet. You aren’t required to, but if you desire a good marriage then you need to find a way to love and raise kids that aren’t your own, and still treat them as though are yours at times. It’s a thankless job that no woman should ever have to do, but it is a role that many women find rewarding despite the uphill battle they must fight.

It’s hard to believe that someone who says everyone is out to get them isn’t a crackpot, but when it comes down to believing whether the same man killed her father Julia’s character has to know the truth. She corners Jerry at one point and forces him to talk, which he does, affirming that he didn’t kill her father, and that above and beyond all things, he made great coffee.

Opera music must touch everyone differently because I don’t think I’ve ever shed one tear at any play I’ve attended and I’ve been to a few tearjerkers. In this one however Roberts’ character is so moved that she begins to cry near the end, presumably at the beauty and power of the act.

With some of these films you really need to watch the movie to get the gist of it.