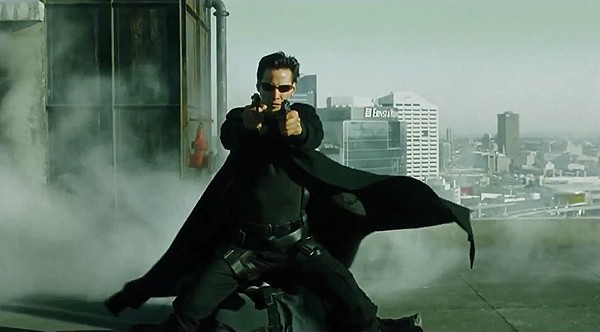 There’s something ominous about a long black trench coat. It hides away so much and yet sends out a signal of danger unlike any other mundane garment. It seems to speak to a threat that you know could be possible even if it’s not real. In the movies it used to be a sign that the bearer was a bad guy, a villain of such ill repute that you wouldn’t even want to stand near them. In modern films it’s been adopted by both the villains and the heroes as a sort of mixed message. In movies it might just be a fashion statement, but it can also mean that the one wearing it is simply not to messed with.

In fact some might say that those wearing it are harbingers of death. The only question is for whom.

Easily one of the most despicable men in this film, Hans Landa is the type of bad guy that will smile as he kills you. The big, wide grin he wears hides a ruthless level of ambition and a wolfish nature that belies his cunning and intelligence. He knows things before you do, and he knows that you will attempt to hide them for him. After all, he is a top operative in the Nazi army, there isn’t a lot that gets past him.

Marv always liked a good coat. Too bad he kept getting holes and tears in the ones he wore. When you live the kind of life that he did though it’s bound to happen that you go through your finest clothing on a regular basis. He’s not exactly a good guy, but he’s a far cry from being the bad guy. He’s just A guy that doesn’t like injustice and isn’t shy about dealing it out on his own terms.

It wouldn’t seem right to wear anything but black when you’re essentially a death-dealing half-vampire with a serious hate on for your evil cousins. Blade is the one person that all vampires know to fear no matter how powerful they are. Those that claim to not be afraid of him are either too arrogant to understand the danger he poses or simply too strong to really see him as a threat.

Even the afterlife cares about justice. When Eric Draven returns he’s not out to right any other wrongs but those that were done to him and his fiancee. The rest of the world, aside from those he cares about, can burn it would seem. He’s not a conventional hero, in fact you could call him an antihero, but he knows the difference between good and bad and when given a choice his actions will always favor the greater good.

He started off as the man that didn’t believe, but eventually became the One, the savior, and the individual for whom nothing was impossible. But in all honesty he was still a flesh and blood individual, albeit one with immense powers and potential to develop even more. His dark garb might just be the digital image he wears in the matrix, but it conveys a sense of mystique and danger that only the most powerful programs refuse to fear.

The black trench coat is a symbol of darkness in some ways, but also a garment that is quite impressive in how it can help an actor to dominate a scene.