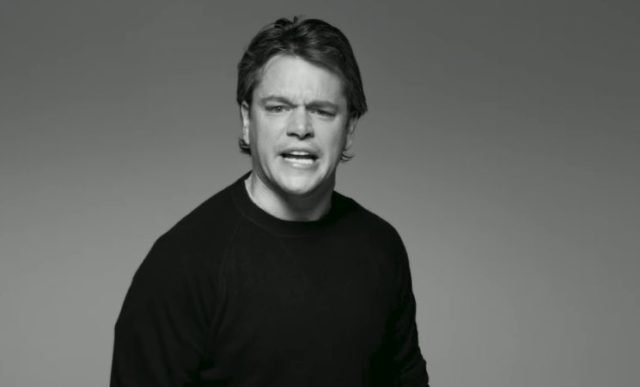 Matt Damon is kind of what I would call a desperation yeller. He can yell forcefully but it still kind of sounds like he’s pleading his case to someone in an attempt to get them to understand why he’s yelling. Throughout the years he’s taken a lot of flak for being caught up in roles that are too sensitive or touchy-feely or perhaps even just too intellectual. That really changed as he got older though and started showing up in more action films that pushed his talents to new limits and kept going. He’s still capable of acting out a drama or even engaging in comedic acts but he’s definitely thought of more as an action star at this point.

But his yells, impressive as they are, still seem to come from somewhere other than a deep-seated place of sorrow or anger.

After laying out everything they’re guilty of and in such precise detail it wouldn’t be too surprising to see any of these board members fear for their lives when confronted with something like a voodoo doll, even if it is made out of an onion. But then of course Damon has to make a gag out of it just before coming in with one of the biggest hand cannons available. That’s a classic moment.

I’m not sure but anyone would start yelling once they’ve been locked into a chamber that’s being blasted with radioactive particles. The idea of feeling your skin start to fry would make me think that you wouldn’t be screaming for very long as the instinct to huddle up and curl into a ball would take over very quickly. No job would be worth this kind of risk.

As brilliant as Will is he’s still kind of clumsy in the way he deals with people since he can’t even have a conversation without thinking ten steps ahead and making an uneducated guess on where it’s going to go. If your girlfriend feels confident enough that she wants you to go with her then you should say yes. Saying no makes you kind of a wuss at this point, and arguing just makes it worse.

Poor Scotty, he just didn’t know. I would end that with my favorite rhyme describing Fiona in the most perfect way for this film but I’ll keep it clean. Matt Damon showed up for a cameo in this film and it was great when he came out and got on the mike. Then just before picking up Fiona and heading to the backstage area, namely the bushes, he just wigs out for a moment.

Mr. Ripley is a talented psychopath, that’s for certain, and he’s completely over the moon for Dickie. The trouble is that Dickie is such a free spirit that he gets bored easily with people that don’t evolve and move along with him at his rapid pace. Honestly Dickie’s no saint and he’s not much of a grounded person, but Mr. Ripley is just flat out spooky.

Just listen to his yells and you’ll hear that desperate note.