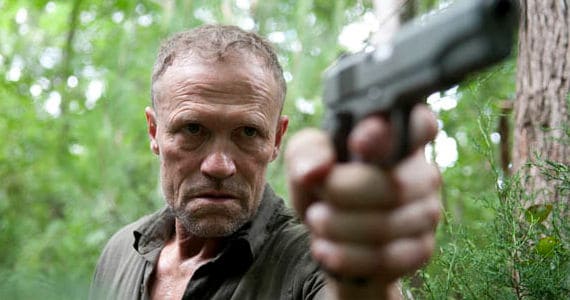 Michael Rooker has an extensive list of acting credits to his name. He’s established himself in challenging roles, taking on drama, action and thriller films. In fact, he has appeared in film or on television every year since his debut in 1986 and continuing through 2017. His work as a fine actor in supporting roles, both minor and major, is what has provided him with an extensive filmography and notable career.

Rooker has an interesting face, for one thing. It is a handsome face, and a universal one. It is the type of face which lends itself to many characters, rather than drawing itself to a starring role. However, it’s important to realize that the roles which have required him to be the most malleable, are those which are making him the most recognized, due to more than two decades as an actor. His raspy voice is his trademark. He also studied Aikido with Japanese master Fumio Toyoda Shihan, and this hasn’t hurt his ability to take on highly physical roles.

Paul Tassi, in a recent Forbes article, noticed Rooker’s emergence as a star in the recent film, Guaridans of the Galaxy Vol. 2. Tassi discussed the character Yondu, comparing the supporting role in the original film with the core cast status in the sequel. Yondo’s story line is fully fleshed, and Rooker’s performance in the role is praised. Tassi notes that Rooker’s role as Meryl in The Walking Dead TV serial has brought him recognition with younger viewers.

For an actor to have longevity in film, however, he must portray his roles well. Rooker has worked steadily, and that is significant. Steady work generally comes from solid professionalism and a reputation for being not only capable and dependable, but talented.

Michael Rooker is an actor who has become famous mostly portraying bad guys. He’s been evil, scandalous, remorseless, bad-tempered, and disgusting. He also has portrayed some truly good characters. To admire Rooker’s finest moments is to become acquainted with some of his finest roles:

Henry: Portrait of a Serial Killer

In this indie film, Rooker portrays Henry Lee Lucas, a murderer. The biographical film was nominated for the Top 100 Villains list by the American Film Institute in 2003. Henry Lee Lucas murders people without regard as he drifts across the country. He is a serial killer who methodically avoids the police by changing the way he murders each of his victims. He includes Otis and Becky in his killing sprees. It is reported that Rooker remained in character throughout the entire filming process. The film has been critically praised and censored for its realistic depiction of a murdering psychopath. Rooker’s portrayal of Henry is chilling and terrifying.

It takes courage to play a murderer of three civil rights workers. This drama about the 1960s FBI investigation into the deaths of these men working on the “Freedom Summer” movement to prepare African Americans to register and vote is a gripping story. Rooker’s plays a hate-filled, Ku Klux Klan believing, disgusting yet fascinating man.

Rooker plays Rowdy Burns, a NASCAR champion and rival turned friend of Tom Cruise’s character. The action film was hugely popular, and Rooker gained wide recognition because of it. His portrayal of Burns has been described as the one which gave the film credibility.

Rooker plays Hal Tucker in this film, alongside Sylvester Stallone. The plot surrounds the story of mountain climbers and their ill-fated involvement with U.S. Treasury agents who have stolen more than $100 million in uncirculated bills. In one of his rolls as a good guy, Rooker is noted for his athletic abilities and rapport with Sylvester Stallone. Rooker noted that the filming took place in Italy, where he lived for seven months. He also worked in the mountains at the 10,000 foot altitude.

Rooker plays Sherman McMasters, an outlaw who becomes a lawman and plans to retire in Tombstone. Though he hopes to exit quietly, he discovers that Tombstone is filled with outlaws who are just as heinous as he once was. Rooker said that he first learned how to shoot when filming Tombstone, and continues to shoot regularly at a shooting range which he co-owns near Los Angeles. His realistic performance earned him recognition from lovers of Westerns.

Of the more than 115 acting credits Rooker has accumulated over the past decades, his work in the horror and science fiction genres have brought him new challenges. In addition to his films, numerous TV series such as Stargate SG-1, The Outer Limits, The Edge, and Tremors have added to his varied fan base. It will be more than interesting to see what’s next for Rooker.

Honorable mention to the movie Mallrats.Â  Had to mention it.