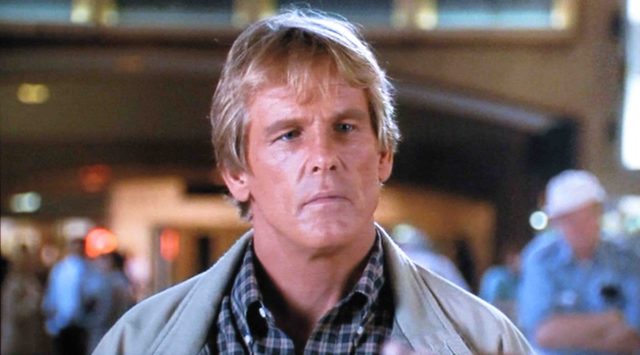 Listening to Nick Nolte yell is like listening to rocks banging together. Nick Nolte had such a rough voice that you have to wonder if just talking hurts him sometimes or if it’s come by honestly due to one lifestyle choice or another, or if it just developed that way as he got older. I’ve heard tell of people that smoked and drank a lot in their lives earning a voice like this, but it also seems possible that it could just happen as one gets older. Whatever the case his voice is one of the roughest in Hollywood and it seems as though he’s made good bank on that in many films. And why not? It gives him this image of being a rough and tumble kind of guy that’s been there, done that, seen it, lived it, and grew tougher for it.

He certainly knows how to act the part.

Now it’s been a while since I read comic books but I don’t recall anything about Bruce Banner’s father being this nuts. Maybe it came up in a series I missed but the MCU took this story back and made it respectable again since really Nick Nolte was one of the only bright spots in this entire film. The biggest question on my mind is how could anyone think that Eric Bana could play a convincing Bruce Banner?

There’s no real good guy in this movie since the counselor goes after the criminal in all the wrong ways in an attempt to get rid of him. But the unfortunate part is that the criminal knows all the legalities and loopholes he can use and does so on a regular basis, making it that much harder to get rid of him. So yeah, when all else fails use a rock and do your best to drown him.

Remember Bobby Knight? That’s who this coach was modeled after if you couldn’t tell already from his verbal outbursts and physicality around his players. He wasn’t a nice guy despite doing all he could to win and make the basketball programs something special. When it came down to paying players to get on the court and giving them incentives to play for the school though he at least expressed dire reservations.

I can remember a time when Kurt Vonnegut was still required reading in college, and in some AP English classes in high school. Nowadays it’s the rare teenager that even knows who Vonnegut was and the rarer student that has read anything of his. I would say that’s kind of sad but like a lot of authors that dealt in very real subjects that were a bit controversial for their time he’s kind of an acquired taste.

There’s a decidedly fine line that’s drawn when war veterans are brought into films as consultants, be it about their story in the war or someone else’s. Some folks think that this is great because it gives a very real world view that can help the movie out. Others tend to think it’s a bit of grandstanding that doesn’t need to happen. Personally I kind of agree with the former and only slightly with the latter if the film ends up making the individual look like a superhero of some sort. In some cases it’s well-deserved, while in others it’s kind of ridiculous.