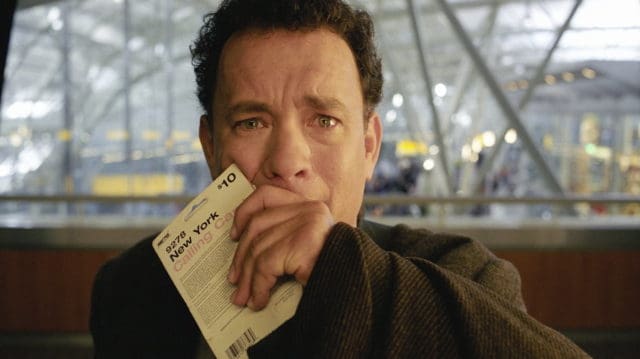 Crying scenes seem so inherently personal that it seems almost a sin to watch them simply because you are seeing into a person on a deeper level than is considered polite at times. You’re watching them as they lie exposed to the world and are seeing it as entertainment. Thankfully actors are so skilled that they’re able to enter these scenes while seemingly giving everything away, their innermost fears and thoughts, but are still using it as a mask to play a role. That might seem a little perverse really but it’s something that the greatest actors know how to do on command and can perform over and over again as needed. It does tend to take a toll on the body and the emotions since forcing yourself to cry is not the easiest thing in the world. But those that can do it and return to center once again are pretty skilled.

Tom Hanks is easily one of the best of them.

After being discriminated against and fired for being a homosexual, Hanks’ character is now living with the very real fact that he is going to die at some point. What he wants now is justice, not just for him, but for those like him that are afraid to come out for fear of what will happen. And yet through all this he still tries to live in the manner he feels comfortable, because to be alive is something quite beautiful.

War will break all people in time, be they man or woman. Captain Miller is known to be one of the toughest men in the service but even he has a breaking point. He has a family to get home to and a job to do and must perform his duty before he’s given leave to return to his life. It’s enough to break any man, knowing that he has something to go home to and being unable to reach it.

Kids don’t seem to understand that the world of adults is not a very nice place sometimes. Â When you’re young you’re given a buffer against the worst of it, that being your parents. Once you’re out in it however there are a lot of moments that seem a bit scary and uncertain. Â That’s why it’s so important to be a kid while you have the time, the world is waiting to break you down the moment you become an adult.

Some people might cock an eyebrow at a guy crying over a lost volleyball, but seeing as how Wilson was his only companion on the island for so long it’s not hard to reason this one at all. He was in effect forced to say goodbye to the only thing that got him through for so long, the only part of himself that he hadn’t lost yet. Try saying goodbye to a piece of yourself, that’s how tough this scene is.

He’s stuck in a terminal that he can’t leave and he can’t understand anyone or anything he hears since he doesn’t speak English. That seems like it would be enough to make a person nervous, but seeing images that indicate your country is in sudden turmoil would just about break someone.