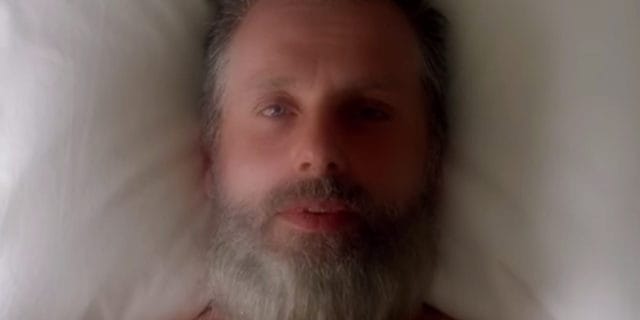 The eighth season of AMC’s “The Walking Dead” premiered October 22 and, as usual, it has fans speculating. When “The Walking Dead” released its first trailer for Season 8 this summer, it gave fans something to talk about. The premier titled “Mercy” has promised to start a dynamic new season. There were powerful pre-war speeches, Snide remarks by the enemy, preparations for war and a scene where hero Rick Grimes has apparently aged. Fans began to speculate about a time jump like in “The Walking Dead Comics”. One of the biggest fan theories was that Rick had actually never woken from his coma from Season 1 and that it was all a dream.Â  Show runner Scott M. Gimple adamantly denied that theory.

Here are the top 5 “Walking Dead” Season 8 fan theories after the premier.

Scott M. Gimple clearly denied the fan theory that Rick Grimes (Andrew Lincoln) never awoke from his coma in Season 1 and that the events of the past 7 seasons were all his dream. Some fans even speculated that Rick could be a walker given the fact that he was left in a coma for 3 weeks in a hospital abandoned by all but walkers. So what was up with the scene in the Season 8 premier of Rick waking up with a bushy gray beard, hair cut and a cane?

Some fans have wondered if, like the comics, the series will jump ahead a couple of hears after the war with Negan and the Saviors. In the premier, Rick is scene comfortable in a home with Michonne (Danai Guiria), an aged Carl (Chandler Riggs) an Judith out of the toddler stage. Could the series jump ahead as much as 5 years? Some fans are speculating there could be a mid-season jump in time which would certainly add some excitement.

There is also a scene in the Season 8 premier showing a weary, defeated looking Rick standing before two freshly dug graves. Is the alternative to the above happy ending that Rick has lost two more loved ones in the war with Negan and the Saviors? It seems that the war is going to be a series of battles that Rick and the Allies win and lose before culminating in a huge battle.

“My mercy prevails over my death”

With the episode titled “Mercy” and two references to the quote, “My mercy prevails over my death”, there is an obvious connection but what does it mean? In a scene from the Season 8 premier, Carl is on a supply run and meets a mysterious man. The man asks for food and tells Carl that he understands his fears. The man quotes the Koran: “My mercy prevails over my death”. Carl later returns to leave food for the man.

In a flash forward scene from the premier, a bleary eyed Rick is scene mumbling something. It turns out it was the same line from the man that Carl met, “My mercy prevails over my death”. We can expect a lot of death to come this season in the battles against the Saviors, but how much death will Rick have to face? Rick gave a powerful speech to the Allies preparing for war. He tells the troops that the “sociable and righteous” must lead, not the killers. Rick says: “If we start tomorrow right now, no matter what comes next, we’ve won”. Even if there has to be death, the mercy that will be shown in the future will create a society.

Fans are questioning whether Rick Grimes will be a leader in any future society or government. Rick has always struggled with the demands of leadership in that world. He has always tried to balance his own agenda with that of the good of his group. Rick clearly wants revenge on Negan and we are certain he will stop at nothing until he kills Negan. Can Rick still be a good leader with his own personal agenda? It’s something he has struggled with over the years. Father Gabriel indicates that Rick sometimes leads with his ego, yet Rick tells Maggie she is a good leader and he will follow her direction.

Darryl finds a small statue of a soldier with the words “Didn’t Know” written on its back. This has left fans speculating its meaning. It obviously is cryptic enough to mean something. Some have said that Dwight left it there for Darryl after to let him know that he didn’t know the Junkyard Group would attack. It’s possible. What is clear is that we will find out what all of the Easter Eggs found in the Season 8 premier will be revealed.