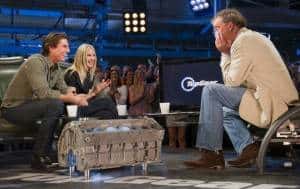 If you’re not sure what Top Gear is, all you need to know is that the show’s official description takes pride in being “one of the most illegally downloaded shows on the Internet.” The motoring show is that irreverent. It’s also charming, occasionally controversial, and always wildly fun. That’s why 60 Minutes featured it last night, calling it one of “the most popular television programs on the planet.” I’m more than happy to fill the void in TVO coverage and bring you the vehicular mayhem.

We’re treated to a review of the Bugatti Veyron Super Sport. I’m not much of a car geek, but I’ll admit that the Veyron is one of my dream cars. Most of us will never be able to afford one, but watching one in action is a beautiful thing. Captain Slow himself, James May, hosts the piece, in which he tells us the Veyron was no longer the fastest car in the world (second to the Shelby Aero) so the Germans made a new Veyron. Yep, that sounds about right.

The alleged top speed of the Super Sport is 258 miles per hour, five more than the original Veyron. At 200 miles an hour, James calls wind resistance “trying to drive through a fruitcake,” hence why the Super Sport needs an additional 200 horsepower. Of course, he has to test out all these new improved specs for himself, with the help of a team of Bugatti experts and a test track. It’s a pretty amazing watch, as you have to wonder how much the car – and James – can take. As he says, it’s “beyond the known borders of car performance.” The Veyron tops out at 417.9 kilometers per hour (260 mph) under James, but gets 267 mph with a Bugatti test driver behind the wheel. If I only had an extra $1.6 million.

This, of course, begs for the appearance of The Stig. “Some say the Scottish released him a little bit too soon,” Jeremy says, “and that he spent all week pushing an effigy of Rubens Barrichello through his desk fan.” Even though we now know who The Stig is (not officially, but we’re pretty sure he’s Ben Collins), it’s still great to see him, and the Veyron tops the lap board. One wonders how they’ll kill off White Stig, and whom he’ll be replaced by (the Stig’s fat cousin? German cousin? Vegetarian Stig? Russian Stig?).

In the news, the boys discuss how women in short skirts may be the biggest driving hazard in the world (to men, anyway). “It’s impossible not to look,” Richard insists. Jeremy wants to know if there could be a car that runs on “cheese and onion crisps [or] corned beef salad,” which leads to a piece in which we see a Porsche 911 that is covered in aluminum foil and runs on pedal power. The resulting lap of the track is so slow (18:37:00), they don’t even show us the entire circuit.

After last week’s caravan fire, the boys have decided to scale back on the challenge front this week. After a letter from “some Swedish youths,” Richard gets the unenviable task of driving a customized Volkswag Tourareg to race against professional snowmobile drivers. Whether it’s sticking him in a bobsled, stuffing him in a sub-zero car, or letting him race to the North Pole with a dog team, the Top Gear Powers That Be certainly do like trying to freeze the Hamster.

The race covers approximately twelve miles at a ski resort. From the start, Hammond falls into his usual habit of yelling at the car as if it will help him (remember the time he tried to race a Bowler Wildcat?). He thinks he’s taking a shortcut, and ends up driving onto a ski run and trying not to kill some skiers. It’s a fairly close race, but when the ice thins out, the VW is able to pass the snowmobiles. He’s celebrating when one of the snowmobiles jumps over the roof of the ski shop, and he realizes he’s been had (though he continues to insist he’s won).

Is it as fun as watching a caravan catch fire? No, but admittedly, burning caravans are one of nature’s great joys.

Star In A Reasonably Priced Car

This week we get a double dose of celebrity guests as both Tom Cruise and Cameron Diaz drop by the studio. Jeremy calls them “the genetic blueprint for the human race.” I don’t think he’s been this happy to see someone since Kristin Scott Thomas was on.

The pair are there to discuss Knight & Day, so they talk about the cars in that film, as well as the stunt work. Having heard Cameron did a lot of her own stunts, Jeremy persuaded her to take him out for a drive on the TG track, where she proceeds to pull off some powerslides. “I was vomiting,” he says. From there, they discuss Tom’s motorcycle collection, including his tailored bike. Cameron makes the mistake of mentioning that she drives a Prius, causing Jeremy to pretend he suddenly loves them.

Lap time! Cameron has a fairly calm lap (except for having to be bleeped a few times). She does it in 1:45:2, which puts her on top of the entire celeb lap board for this series. Tom, however, has all the fun. Not only is he talking to himself, but at one point he nearly rolls the car. The entire left side of the car lifts up off the track. Yet he clocks in at 1:44:2 and swipes the title from her. Cameron, enjoy your one minute of victory.

I maintain that we need a campaign to have Law & Order: UK‘s Jamie Bamber and Bradley Walsh on in Series 16. Preferably at the same time. They’d try to one-up each other’s lap times and it would be epic. Hopefully you’re listening, BBC Two?

If there’s one disappointing note here, it’s that we are officially less than a month away from a US version of Top Gear, which is sure to pale in comparison to the original. The US has a horrible track record in adapting British television, and I can’t imagine that the hosts will have the same great chemistry that Jeremy, Richard and James do. Yet I suppose it’s also a great compliment when three countries (Australia, Russia and the US) want to copy your show. Long live Top Gear. 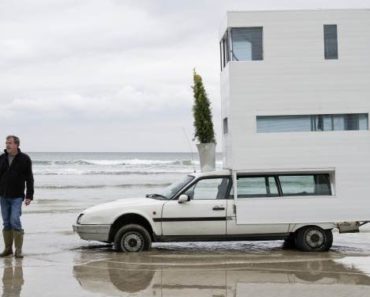