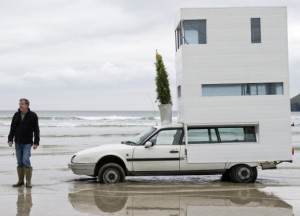 Can you believe we’re at the end of another season of Top Gear already? Where am I going to find outlandish things like this to laugh at? (Okay, so that’s from Episode 15.04, but BBC America didn’t have any images from this episode. And you can’t tell me that’s not hilarious.) Jeremy, Richard and James sent us off tonight with some help from Law & Order: Criminal Intent‘s Jeff Goldblum.

“Tonight, Richard wears a towel, James and I eat some crisps, and there’s a fly in our studio.” Yes, Jeremy, thank you for that typically uninformative introduction. It’s still better than Episode 4’s “everyone wears a hat” intro.

Jeremy tests the Ferrari 458, which has more buttons than a TV remote. He’s not impressed by how you can’t have the satnav and the speedometer at the same time, as they use the same monitor. He does, however, think it’s pretty, comparing parts of it to Kristin Scott Thomas’s cheekbones. We all know how much Jezza loves Kristin Scott Thomas. He’s also thoroughly pleased by the ride, saying it makes him forget about the extravagant price tag(about $272, 837.70 in US dollars) and calling it “one of the all-time greats.” I think that means he can overlook needing a manual to work the steering wheel. The Stig tests it out to the tune of “Cotton Eye Joe” and clocks in at 1:19:1.

In the News segment, Hammond brings to everyone’s attention Cameron Diaz’s positive words in the press about her appearance last episode. He claims that Jeremy was taking all of her attention. Jeremy accidentally says “I’m now on her to-do list” to raucous laughter from the audience, which realizes the double entendre before he does.

The producers of Top Gear are having another argument with our boys, this one about whether or not British sports cars are terrible. To settle this, they’re given 5,000 pounds to buy one and put it through a series of challenges to be determined. Jeremy arrives in a Jensen Healey, James in a TVR S2 (hopefully it won’t burst into flames), and Richard in a Lotus Elan.

The first challenge is on the Lotus factory test track, where they try to see who can post the fastest individual lap time (Richard at 2:09:00, followed by James at 2:17 and Jeremy at 2:19). They then have to compare their times to the Stig’s in a Peugeot. It’s not even close; the Stig does 2:22:00.

Part two involves seeing if their cars can make it on another road trip, but before they can get started, the Peugeot explodes in a fireball. At least the Stig survives. The boys brush this off and take to the road, where Hammond’s Lotus quickly loses a roof clip. You know that’s not the last mishap that’s going to happen on their 280-mile journey. 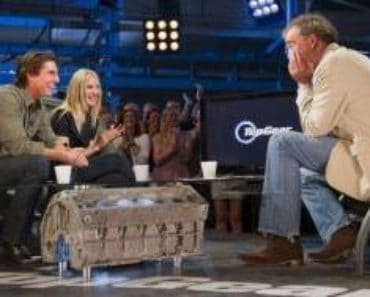