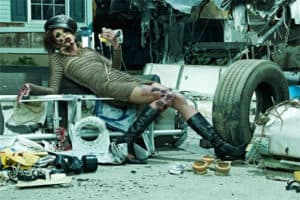 Change isÂ something built into the DNA ofÂ America’s Next Top Model. TheÂ show has been through aÂ series of different judges and contributors in its 19 cycles, while tweaking the format of a cycle, instituting new themes, and making over every girl who gets to a certain point in the competition. But heading into cycle 19, Top Model did more than just a minor change here or an experiment there; it blew up theÂ show, getting rid of the J’s (and Nigel), bringing aÂ social media element into the competition, and recruiting a hoard of college girls to fill the Top ModelÂ Sorority House for a collegiate-themed cycle. This would either breathe new life into the aging franchise, whichÂ saw ratings collapse in cycle 18, or end up as one final desperate cling to relevance before the inevitable cancellation that got postponed thanks to all the changes.

Now that we’re a good way into the cycle, down to the finalÂ six and on a hiatus, how have all the changes Top Model made impacted theÂ show?

The Judges
Top Model booted Ms. J, Mr. Jay, and Nigel Barker in between cycles, the only non-Tyra remnants of theÂ show that had been thereÂ since the beginning. In their place came famed choreographer Jonte (set to be the movement coach), celebrityÂ stylist Johnny Wujek (taking over for Mr. Jay at photoÂ shoots), model Rob Evans (joining the panel), and blogger Bryanboy (in charge of reporting theÂ social media activity for each contestant). The new blood has been the one element of Top Model that I’ve yet to truly form an opinion on, as a whole; it could be that after 18 cycles of theÂ same faces and routines, any change theÂ show made would have been disconcerting, but none of the four have made much of an impact yet.

Jonte’s my favorite of the bunch, bringing an energy and life to theÂ show that it doesn’t have when he’s not around, but his role has been very minor and he’s yet to be given a chance to work his magic. Johnny’s gotten better as the cycle has went on,Â showcasing more personality and forming connections with the models that he works with; I would, however, like for him to bring out a little more technical knowledge to his coaching at theÂ shoots, if onlyÂ so we canÂ see what he’s got in that department. Rob is more effective out in “the field” talking to the girls, modeling with them, and facilitating challenges than being a judge, where he doesn’t have much ofÂ substance to add to the dialogue. Having the perspective of a working model is an interesting dynamic to add to the panel and once he grows into the role of judge, I think he could work well alongside Kelly and Tyra. Bryanboy is the weak link of the bunch, often too eager to burst out of his role asÂ social media correspondent and offer critiques of his own to the contestants. His presence at photoÂ shoots is unnecessaryÂ and when we do get a flash of personality, it paints him in a decidedly unflattering light.
Score: 5

TheÂ Social Media
Top Model added in the element of fan voting this cycle; during filming, each round of photos were uploaded onto The CW’s website and voted on, with the averageÂ score for each photo added to theÂ scores from the challenge and the judges. Call-out would be determined not from the personal preference of the judges and not with body of work in mind but thanks to the weeklyÂ scores from each event. At panel, Bryanboy would give an indication of what direction each girl’sÂ social mediaÂ scores were headed, playing video clips that fans hadÂ sent in commenting on a certain photo and reading Facebook comments about each girl’s performance.

In theory, I like theÂ social media addition – it makes Top Model a little more modern and gives fans a voice for the first time in theÂ show’s history, while alsoÂ stressing the importance of engaging an audience and making sure that a model has to perform every week and not coast off of good will. However, the video clips they play largely offer nothing new to what has already beenÂ said by Kelly, Rob, and Tyra, generally tooÂ short to bring much ofÂ substance and tending to be more cheerleading than actual judging. The one time they brought out a helpful critical video, where a fan explained her thoughts about Allyssa’s body positioning, it added to the dialogue and introduced a point that hadn’t been brought up yet using easy to understand knowledge of modeling technicalities.

The Facebook comments are just as ineffective, often picked more for their punchiness than the modeling knowledge that they bring. Top Model fans areÂ smart and it’d be nice for theÂ show to highlight that now that the fans have a way to participate in the show.
Score: 4

The Prize Package
Cycle 19 of Top Model found the reward for making it to the top changing yet again. Gone are Vogue Italia, CoverGirl, Extra, and a musicÂ single, replaced by aÂ spread in Nylon magazine, campaigns with Nine West and Smashbox Cosmetics, and aÂ $100,000 cash prize. In addition, each challenge victory brings $10,000 to the winner’sÂ scholarship bank (and a trip to the Tyra Suite, filled with clothes and make-up for the taking), with the winner of the cycle able to claim the money in her bank.

The prize package was one of the best changes that Top Model made before cycle 19, eliminating the cognitive dissonance of having both Vogue Italia and CoverGirl while giving a little more focus through well-matched campaigns and an appropriateÂ spread. The introduction of theÂ scholarship bank was also a pretty wise move that leaned into the cycle’s theme in the right way, made the challenges haveÂ some type of extra weight to them, and beefed up the potential pot of gold at the end of the Top Model rainbow. It’s not the most glamorous collection of rewards in the history of theÂ show, but it’s a cohesive mishmash ofÂ prizes that puts the focus back on modeling and might give the winner a legitimate chance at making a career in the fashion industry.
Score: 8

The Theme
Beginning with cycle 17, Top Model has instituted a theme for each cycle, as Tyra claimed to not want any more “normal” cycles; first, we had all-stars and then there was a Revolutionary War rematch between the UK and the US. Now, it’s the battle of the college girls, each of the top 13 representing a different college, university, or various form of higher education. It wasn’t a huge change from a casting perspective (pretty 18-24-year-old females between 5’8″ and 5’10”), but it felt like a theme that could make its presence known without getting too overwhelming.

And that’s just what happened, as the college theme has been implemented (the Top Model house, the room distinctions, a handful of challenges/shoots) withoutÂ swallowing cycle 19 whole. Although I liked the British Invasion cycle, the theme got pounded too much before being completely dropped around the cycle midpoint, but in cycle 19, the college theme has been more minor casting note than dominating cycle presence. Plus, as mentioned above, theÂ scholarship bank took advantage of the theme and becameÂ something positive, proving that Top Model has gotten better about using its themes.
Score: 7

America’s Next Top Model returns next Friday at 8:00 on The CW.