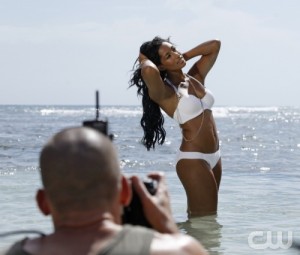 Here we are, America and people who decide to read my recaps of your Top Model competition. The final four – the (supposed) best of the best gathering for one finalÂ showdown to determine who makes it into the finale next week. Cycle 19 has found America’s Next Top ModelÂ struggling to implement the changes that it made during its last hiatus and figure out the competition that it wants to be entering itsÂ second decade of existence. It’s had moments that have made me optimistic about the future of theÂ show, moments where everything coalesces and theÂ show is theÂ same lovable, goofy excuse for a competition that it has always been, but there are other moments thatÂ show me that Top Model has a long way to go before figuring it out.

A Horse is a Horse – Of Course, Of Course
The final pre-finale challenge takes the girls to the Equestrian Center where they find Rob and Yendi Phillips, first runner-up at the 2010 Miss Universe pageant and representative from the Jamaica Tourism Board. Yendi explains that the challenge this week will be a commercial advertising the wonders of Jamaica; they’ll be given 2 takes to package factual information about the country with a personal twist to make the commercial their own. Additionally, they’ll be writing their ownÂ script, which will feature 15Â seconds of dialogue that will beÂ said while riding a horse in the ocean. The winner of the challenge takes home the $10,000 inÂ scholarship money, as well as a worldwide campaign through the Board.

Up first is Laura, whose nerves have thrown her noticeably off course the last few weeks of the competition. Her comfort with horses may give her a leg up on the other three girls, but that advantage is negated by the fact thatÂ she doesn’tÂ sound comfortableÂ speaking to the camera – you can hear the tremor in her voice, but Rob and Yendi both like that whatÂ sheÂ said is exactly what they’re looking for. Leila has to deal with an obviouslyÂ spooked horse that unnerves her more than a little bit and makes her first take a throwaway; theÂ second take is an improvement and finds her fairly comfortable in front of the camera, though herÂ script might not be theÂ strongest. Nastasia completely blanks on herÂ script during her first take and has to improve to fill in the dead air – the content isn’t asÂ specific to Jamaica, though, which knocks her out of the running almost immediately.

It’s Kiara that ends up winning the challenge and getting the ad campaign, thanks to aÂ second take that vastly improved on her first. Admittedly, I didn’t think thatÂ she could pull off a take after watching her nearly lose control of the horse and utter about 500 expletives on camera, butÂ she pulled it together for a natural, friendly commercial that gave her another challenge win. Laura, poorÂ sport thatÂ she is, ends up pouting and doesn’t congratulate Kiara on a job well done; theÂ spirit of Kristin is alive and well in the competition, you guys.

Bikini Model Realness
The photoÂ shoot brings back JezÂ Smith and Ben Bennett for the Dream Come True campaign; the former was the photographer for lastÂ season’sÂ shoot (and is a former judge on Australia’s Next Top Model), while the latter is a representative from Hatch Beauty, the company behind the fragrance and a man with aÂ strong opinion. TheÂ shoot will feature a giant bottle of the perfume in the water and each girl in a white bikini, with the theme being the youthfulness and energy that comes from your dream about to come true. OrÂ something.

Nastasia looks very pretty during herÂ shoot andÂ seems to embody the brand of the fragrance pretty well, particularly onceÂ she brought a little more angularity to her posing. However,Â she might not have given THEÂ shot thatÂ she needed toÂ stay in the competition. Leila let her nerves get the better of her for much of theÂ shoot andÂ seemed to beÂ sleepwalking her way to a 4th place finish, but onceÂ she found the right mindset and turned the “model” on,Â she gave off a warmth that we haven’tÂ seen from her before. After a totally unnecessary talk from Bryanboy that reeked of producer interference and/or possibleÂ sandbagging, Kiara gave us the measuredÂ sensuality that lacked in her dolphin challenge last week; there,Â she turned into a video girl within 3 frames and brought too much hooch in her tooch, but here,Â she’s comfortable and not overdoing it. Laura’s recent bout of insecurity continues in herÂ shoot, asÂ she falls into the trap that Kiara did last week of trying too hard and making theÂ sensuality turn into overtÂ sexuality, off-brand for Dream Come True.

Panel
Clad in blackÂ shirts and brightly colored pants, the final four enter panel for the final time before they compete for the title next week. Leila’s photo is a prettyÂ shot that doesn’t necessarily look like a Dream Come True ad, due to theÂ sexualityÂ emanatingÂ from theÂ screen. There’s this magnetism thatÂ she projects that isn’t intentional, but it makes even the tamest ofÂ shots have a certain type of allure to them,Â so add that to aÂ set-up like this and it could turn intoÂ something too hot very quickly. Kelly thinks theÂ shot is a little too “ba-bam-y” and thatÂ she’d be uncomfortable with something like that targetingÂ her teenage daughter, but Rob thinks it’s not too much and TyraÂ sides with him, claiming that theÂ shot may upsetÂ some parents, but it’s aspirational enough to work with the girls.

Kiara’s photo hasÂ strong body language and aÂ sense of poise thatÂ some of her other photos have lacked during the competition, butÂ she’s not looking at the camera and that’s a tiny bit off-putting to me. HadÂ she turned her face toward the lens and caught the light likeÂ she did last week,Â she would have had an inspiring photo and one that made her aÂ serious threat in the finale, but it ended up being merely very good rather than great. Kelly’s not a huge fan of how “wishing well” her face looks, but Tyra ended up being pleasantlyÂ surprised andÂ since we know that Kiara is Tyra’s girl, thatÂ says a lot. Nastasia turned out a photo that was the most on-brand of the bunch, dripping in innocence and wonder with a nice touch of movement and a non-awkward use of the bottle. However, Tyra informs us that the Top Model demo is 18-34 and that Nastasia’s photo leaned too young, which I don’t agree with on both accounts.

Finally, Laura’s photo was very underwhelming and no judge could find a major compliment to give it, something that’s typically a badÂ sign. Kelly feels like Laura’s losing the edge thatÂ she had in prior weeks, while the stiff,Â non-committal body language and hand placement were critiqued.

The bottom two ended up being Laura and Nastasia, with Nastasia being eliminated by less than half a point. However,Â she remained rather upbeat in her final interview, having not expected to make it this far.

Additional thoughts and observations:
-Can we talk about that opening montage of each girl “lost in thought” and being “haunted” by the critiques they’ve received during the cycle? I’veÂ seen a lot of ridiculousness in my days of watching Top Model and I think this nearly took the cake.
-Rob and Yendi weren’t thatÂ supportive during the commercial, right? I thought that they’d watch the first take, offer a few words of encouragement/pointers, and then let them do theÂ second take, but they were a bit too removed from the action for my liking.
-I want to root for Laura because I think that at her best,Â she has the potential to be a great model, but between the awful attitude and the constant crying, I can’t muster up any excitement for her.
-Conversely, I really like Nastasia and think thatÂ she got a raw deal tonight, but all the random God talk put me off. Honey, God has more important things to worry about besides you winning a competition on The CW. Like me getting my review in on timeÂ so I can go to bed.
-What’d you think about the weird pre-panelÂ shot of the final four that was like “okay, let’s go”? Have they ever done that before?
-Bryanboy wasÂ serving NeNe Leakes realness with that wig, right? Also, I beamed with pride at Kelly threatening to rip it off his head. I run hot and cold with Kelly, but whenÂ she’s good,Â she’s truly excellent television.
-Tyra pretty much rubbed Nastasia’s loss in,Â stressing that hadÂ she pulled it together in the challenge,Â she would have been in the final three and not Laura. I love meÂ some Aunt Tyra and I don’t thinkÂ she did that maliciously, but it read really, really poor on her.
-The judgingÂ scores have been…very weird recently. Out of proportion with the comments, even. I know that panel is a long, long affair and that they had to cut down a lot in order to make the episode flow and whatnot, but how in the world they gave Laura’s photo 2 7s and an 8 and couldn’t find a compliment for it, I’ll never know. My Top ModelÂ senses tell me that they may know how everyone did in social media and challenge before panel and tailor theirÂ scores to keep the “right” girl in/provide the best drama.
-Next week on America’s Next Top Model: It’s the finale, everybody! Kelly mentors the final three through their Nine West campaignÂ shoot, the models head to Half Moon Bay for their NylonÂ shoot, and the runwayÂ show takes place at the hauntedÂ Rose Hall Great House in Montego Bay. Might we be inÂ store for part two of this? Let us pray.