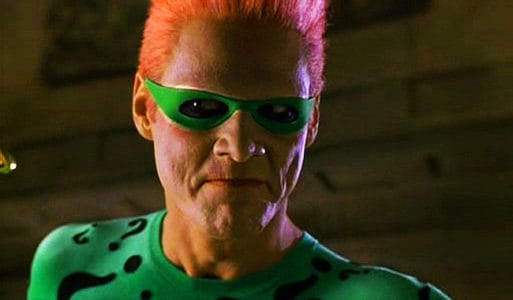 What exactly am I referring too? The performances of some specific actors that carried the forgettable movies on their shoulders. Great acting can stop a forgettable movie from being terrible, and these actors deserve the credit for doing exactly that. For this list, I’ve narrowed down the top ten actors who I believe delivered the best performances in forgettable comic book movies.

By the time I get to number one, there just might be chance you’d want to revisit some comic book movies you’d never thought you’d revisit. Time to appreciate good acting.

The less we talk about Joel Schumacher’s Batman movies, the better. But if I must admit, Jim Carrey playing The Riddler was an absolute… joygasm! Too much? Okay, well in all seriousness, Carrey’s performance as the flamboyant Batman villain was super entertaining. In a world of two overly campy films, Carrey’s Riddler seemed right at home. With the villain’s over-the-top characteristics and Carrey’s uncanny comedic slapstick abilities, this Riddler easily outshines every other character.

Before William Hurt played General Thaddeus Ross in The Incredible Hulk, the always-awesome Sam Elliot played him in the 2003 Hulk movie. Yes, Hurt’s version is cool, but Eilliot’s was there first, and he just rocked that white mustache. Elliot embodied everything the character is about, most notably his intense hatred of Bruce Banner. His portrayal as the ruthless and pragmatic father of Bruce’s lover, Betty Ross, gave me mixed feelings about him. On one hand, I was hoping Hulk would crush him, but then on another hand, I understood he had a job to do. In a Hulk movie with too much dialogue and not enough action, Elliot was really the only character from the movie I enjoyed listening too. I mean, c’mon, who can get tired of that voice?

We all love Vincent D’Onofrio as the Kingpin. He’s awesome, but I can’t talk about him without mentioning the late Michael Clarke Duncan. In a very disappointing Daredevil movie, one of the few redeeming qualities it had was its villain in the form of the physically imposing Duncan. He sold me as the scheming crime boss and proved to be a frightening physical force to Ben Affleck’s Daredevil. I must admit, if his Kingpin and D’Onofrio’s version went at it, I don’t know who would win. It’s a fight I would’ve loved to have seen, but they both killed it. Rest in peace, Mr. Duncan.

When people think about X-Men Origins: Wolverine, they tend to think about Baraka-pool. Yes, I refuse to call that thing Deadpool, and I’m pretty sure Ryan Reynolds would agree with me. The actual main villain, however, was exceptional. Daniel Huston playing William Stryker was one of the few things that kept me watching the film from beginning to end. He was able to capture the despicable xenophobic hostility towards mutants and his ability to manipulate and deceive those around him was true to the villain’s nature. As far as comic book villains go, it doesn’t get more realistic than this, and Huston portrayed him brilliantly.

Suicide Squad had Margot Robbie playing Harley Quinn perfectly and Will Smith playing Deadshot as Will Smith. That’s fine, because they were among the few great elements of that movie, but we can’t forget about Amanda Waller. The ruthless and unflinching organizer of the Suicide Squad was played by Viola Davis, and she was the most intimidating character out of all of them. Davis played Waller as perfect as any actress can play her. She showed unwavering resolve, skillful cunning, and complete fearlessness in the face of danger. With a performance like that, it’s no wonder Davis is returning in James Gunn’s Suicide Squad film.

Yes, Spider-Man 3 was plagued by Topher Grace’s wacky performance as our beloved Venom. However, it also had Thomas Haden Church to play The Sandman. Unlike the version from the comic, Church played the villain as a sympathetic one. He didn’t want to commit crimes, but he did what he had to in order to save his daughter. Church sold me on a villain that had understandable motivations and didn’t really want to see be defeated by Spider-Man. When an actor makes you feel sorry for the villain he’s playing, you know he did a good job.

Isn’t weird that Oscar Isaac was in a comic book movie, but we only briefly saw his face? Isaac played the role of Apocalypse, one of the first mutants to ever live and was seriously overpowered. It’s unfortunate that the film he was in was forgettable, but he brought some serious weight to it. He brought the cold, calculating calmness of the villain to life, which made his presence almost scary. The only he lacked was the massive physicality of the villain, but in my opinion, Isaac’s superior acting did him enough justice. Let’s hope he’ll get another chance to play a villain, so we can actually see his face this time.

Danny Huston wasn’t the only great actor from Wolverine’s origins movie that played a fantastic villain. A much more popular villain, played by Liev Schreiber, took the main stage. Sabretooth is Wolverine’s archenemy, and he was first portrayed by Tyler Mane in the first X-Men movie. That version was more of a brutal, taciturn henchman, while Schreiber’s version had a far more personal relationship to Wolverine. His brilliant acting made Sabretooth look more human, but also ferociously feral at once. His performance was so great, he was originally set to return for a cameo in Logan, but Schreiber’s other commitments unfortunately didn’t allow him to reprise the role. Origins did a lot of things wrong, but casting Schreiber to show the sheer savagery of Sabretooth was something it did very right.

The 2005 Fantastic Four movie fell flat on several levels, but not with The Thing. Michael Chiklis portrayed the character as a self-loathing, sympathetic Frankenstein-like character. He had the most trouble adjusting to his transformation and was desperate to be normal again. Chiklis not only portrayed that aspect of the character well, but managed to show the fun side of him. The moment he said, “It’s Clobberin Time!” I knew he was the right actor for the part. Chiklis’ love for the character helped him deliver a great performance as a hero that didn’t want to be the hero and make a giant orange rock look cool while fighting crime.

It’s a crying shame that the X-Men movies couldn’t live up to their full potential, but it did give us some great performances. One of them that we unfortunately didn’t get to see long enough was Kelsey Grammer as Beast. The best thing about this performance is that we never even saw Kelsey Grammer. We just saw him in the blue fur and make-up. He looked awesome, he sounded awesome, and he was a savage in the final battle. Grammer’s portrayal of Beast was textbook perfect, as he captured his great intelligence, humility, and elegance brilliantly. This is one unique kind of hero to play, and I only wish Grammer stuck around a little while longer. Let’s also not forget about that scene where he looked at his human hand as if he hadn’t seen it in forever. Grammer just knows how to deliver the feels.

There you have it, comic book movie fans. If you appreciate good acting, I suggest you give some of these movies another chance. It’s understandable if you don’t like them, but you can at least acknowledge what these actors brought to the big-screen. If we’re lucky, we just might see them again in more comic book movies that aren’t forgettable.