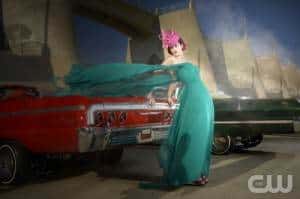 In recent cycles of Top Model, the role of runway diva coach extraordinaire (and total friend in my head) Miss J. Alexander has been greatly reduced. I don’t know if it’s his busy schedule or any internal strife in Modelland, but the show tends to only pull him out for a challenge or two per cycle, with the last couple not even relating to runway. J. always brought a sense of fun and excitement to the show, damn near glistening with personality, and the technical know-how he has about the catwalk has been sorely missed, replaced by…well, Top Model doesn’t really do runway anymore.

I mean, aside from their increasingly ridiculous final runways, of course.

Which is why his presence on tonight’s Top Model was both fabulous and a little disappointing. Having J. back livened up the challenge, but if you’re going to bring Miss J. into the fold one more time, let him serve a little realness on the runway and teach these girls something. Top Model may be dealing more with branding and personality recently, but that doesn’t mean that stuff like runway should be obsolete. That being said, I did like the challenge because Top Model doesn’t do them as often as I’d like and it was something pretty interesting/useful. The commercial challenge, typically reserved for around top six or so, got a much needed facelift, letting the girls ad lib about different products before showing each video to a focus group. For as much as the show has harped on marketing and being able to sell a product, it finally put its money where its mouth was and gave the girls a good opportunity to show off their personalities for the general public. Even though it was less about your words and more about how you came off, I didn’t see where all the praise for Kyle came from; she’s a pretty girl-next-door who had a bit of a brain fart in her commercial, but people ate that up over others that had cleaner presentations and more personality.

To me, Kyle is extremely bland and blank, an attractive shell with absolutely nothing on the inside. She may look like every corn-fed high school cheerleader from the Midwest, but she’s not the least bit inspiring to me, thanks in part to her egregious lack of passion. I don’t need her to be on the verge of a nervous breakdown every episode to see that she cares, but it feels like panel and the focus group wants this for Kyle more than Kyle wants this for Kyle and it’s hard to get behind somebody like that. 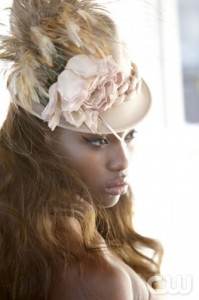 The photo shoot wasn’t awful, either, much to my surprise, though the low-riders could have been replaced and nothing would have been lost. It came off like producers put a bunch of nouns in a hat and drew two to create the shoot, but the end results were actually kind of fierce. The UK girls turned it out, yet again, with a series of elegant, lovely photos, thanks in part to some nice styling that felt much more fashion-y than, arguably, anything else this cycle. My personal favorite was Catherine, an ethereal being in green that used the wind to create some serious drama, with Ashley and Annaliese turning in their best work of the cycle. While the UK is extremely consistent, Team America was up and down, with Laura giving us something fun and Azmarie serving up 1930s movie vixen while not losing herself in the process. But man, what a scrap heap everybody else was. Candace was a one-faced monster, Seymone couldn’t have given a flatter or more insecure performance, and Totally Not a Baby Eboni has absolutely no idea what she’s doing, with her try hard sexuality and meh posing. The best of America may be pretty good, but the disparity in talent and self-awareness from their #1 to their #5 is baffling and should ensure that its numbers dwindle quickly.

My only thing is, why hasn’t every shoot incorporated some type of Brit/American theme? The Kris Jenner episode is looking a lot worse for wear now, as it’s the only one not to play heavily into the “rivalry” aspect of Top Model; I have no problem with the show going either way, hamming it up or playing it straight re: American v. Britain, but it needs to be a direction and go with it. Currently, it’s looking very unfocused and incoherent, extremely damning for a cycle built around a very distinct, easy to implement theme.

But I’m going to say it again, this time a little louder so that everybody can hear. If they keep the stupid Modelland names, there’ll be some awful, lazy judging from here on out. (Even more than usual in Top Model, you guys. Even more.) The reappearance of the branding “expert” from last cycle isn’t a good sign, considering how the words he doled out had a huge impact going forward. He may not have been a problem this time, only facilitating the commercial challenge (won by a darling Annaliese), but it’s enough to make you worry about how a winner of this thing will be selected. If Top Model is actually trying to get a career going after the cycle, maybe it’s not a good idea to see how they live up to some arbitrary, fictional name in the universe in Tyra’s head.

“J. Alexander” was a pretty decent episode that worries me going forward. I’m worried about Kyle outlasting people that want it more, I’m worried about the judging criteria, and I’m worried about just how they’re going to keep implementing the cycle theme, if at all. I did, however, like that the chaff of the competition is being stripped away and once a few more American girls fall off, the real battle for the top spot can begin. It’s been a fairly promising cycle to begin with, hence why I’m hesitant to write it off (again), but if Top Model can focus a little and decide a proper direction, both in judging and challenges, British Invasion may have hope of turning out alright after all.

Thoughts, Quotes, & Observations:
-“My mum’s gonna think my boyfriend smells my arse.”
-“Like, seriously, she’s like toast with no butter.”
-“Let them be jealous. I’m too weighed down by all my diamonds.”
-“Feel that car bounce underneath your hand.”
-“Exotica was Forgot-ica.”
-“You’re a queen. You’re like Nefertiti.”
-Final Call Out Order: Azmarie, Laura, Kyle, Catherine, Annaliese, Eboni, Alisha, Ashley, Sophie, Seymone, Candace (eliminated)
-Eboni may not think she’s a baby, but she was whiny enough for an entire nursery tonight. Also, if you’re so concerned about appearing too young, STOP WEARING YOUR HAIR IN PIG TAILS. Oh my god.
-What did you think about Candace spilling the T on Kyle? I loved it and Tyra making it about her, again, made me roll my eyes. Just one time, don’t lead with an “I” statement. Please?
-Nigel doing another shoot and J. being the guest judge makes me think this was an especially cheap episode, silly hats be damned.
-Next week on Top Model: The girls head to Toronto Fashion Week and get covered in maple syrup. Jesus is a biscuit, let him sop you up?