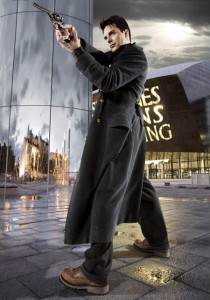 Aliens are coming back to Earth after abducting a bus full of children in 1965. Oh, and the Hub just exploded with Captain Jack Harkness still inside. Must be Tuesday.

Never fear, because anyone who watches Torchwood knows that Jack can’t stay dead. Not only that, but both Gwen and Ianto have managed to escape the explosion and the subsequent attempts on their life by the evil Agent Johnson. One of the rare moments of comic relief in this series comes when a PC on the scene of the Hub explosion continues to insist that he knows Gwen Cooper and she’s not a terrorist…even all the way in the van to raiding her flat. Gwen grabs her ever-loyal husband Rhys (the much underappreciated Kai Owen) and the two wisely flee Cardiff Bay, but not before getting a call from Ianto so they know he’s alive. Rhys puts up with way more than any sane man should, God bless him, and he’s getting the hang of this. Looks like he’s about to become the unofficial fourth member of the band.

Gwen and Rhys flee the city hiding on a produce truck, during which she breaks the news to him that she’s pregnant. He is, of course, overjoyed.

Meanwhile, the 456 have sent instructions to Home Office lackey Frobisher and his people to build them their own facility. I want to see that at Home Depot. Frobisher’s wife is getting really tired of all his BS, and he says there’s nothing to worry about, which of course means there’s everything to worry about. He and the Prime Minister state the obvious: Jack Harkness doesn’t die easily, and people are going to start asking questions about the aliens’previous escapades. Trusty new assistant Lois gets to work to hear about the bomb, and uses her new boss’s ID to quickly connect the dots between Torchwood and the big boom. Unfortunately, or perhaps for the sake of exposition, she then starts asking questions and is promptly told no one wants to hear it.

Later, Gwen tries to set up a meeting with Frobisher, but gets Lois instead, who tells her and Rhys that Frobisher is the one who ordered the assassinations. She has also managed to figure out that Jack is still alive, and researched where, plus set up a meeting. Yes, she is that crafty. Yes, this is probably your new member of Torchwood.

Ianto turns up at what remains of the Hub looking for Jack, only to see the bag of pieces formerly known as Jack loaded into a private ambulance which is also big and black. He’s smart enough to write down the license plate number, and also smart enough to slip a card to his sister in her husband’s morning racing form. The kids are smart enough to figure out that the big grey sedan outside is full of bad guys and the house is bugged, so Ianto’s sister’s husband goes on a fake tear to distract them while Ianto’s sister reads the card and finds out where to meet him. You have to hand it to the Torchwood writers: these characters are using their heads, and not just stumbling around for drama’s sake.

In order to allow Ianto’s sister to escape out of the house undetected, her husband and a bunch of the neighborhood kids go attack the car outside and scare the crap out of the thugs therein. Apparently their juvenile delinquency comes in handy for something. Ianto’s sister meets him at a local park, and he’s forced to explain to her what it is he actually does. At least she doesn’t totally flip out before he borrows her laptop and her car.

The Bag of Pieces Formerly Known As Jack Harkness gets shipped to a remote location which is of course all grey and mostly concrete because it looks cooler that way or something. Slowly and quite painfully (and incredibly gory, but what did you expect?) it re-forms 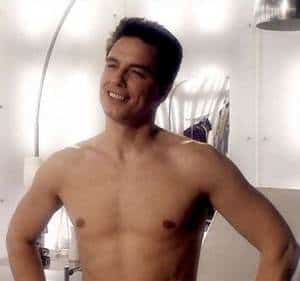 itself into the man we know and love. Cue the obligatory naked Barrowman, before Agent Johnson decides if she can’t kill him, she’ll just go Han Solo on him — and fills his cell with concrete, effectively entombing him alive (shades of the end of season two, anyone?).

Gwen and Rhys sneak into the compound to break Jack out, but are quickly cornered by Agent Johnson and her big army of minions. Just when you think all is lost, the coolest thing in the world happens. Ianto breaks into the place with a forklift. A FORKLIFT. Really, how awesome is that? He literally picks up and rips out the Big Concrete Box Formerly Known As Jack Harkness (and the wall), and Gwen and Rhys jump on the forklift along with it. Everyone makes a narrow escape.

They take the Big Concrete Box to a quarry and drop it off a cliff to shatter it open, thus resurrecting Jack. Cue more naked Barrowman, in full rear view. Allow me to take a moment to appreciate that.

Oh and by the way, the 456 are coming tomorrow. Frobisher has built their Home Depot box in a room at Thames House, and all there is to do is wait.

What do you think? How scary are the 456 really going to be? How cool is it that you can beat bad guys with a forklift? Sound off below.