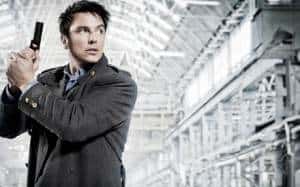 John Barrowman, the star of the BBC/Starz series Torchwood, hasn’t appeared on Doctor Who since his cameo appearance in “The End of Time,” which saw the Tenth Doctor (David Tennant) setting his character up with a potential new boyfriend, Alonso (Russell Tovey). While Captain Jack Harkness has returned since then as the lead in the fourth season of Torchwood, subtitled Miracle Day, he’s been conspicuously absent from Matt Smith’s tenure on Doctor Who. Strangely enough, though, it doesn’t seem like Barrowman much wants to be with Smith’s Doctor.

“Now if it was Doctor Who with David playing the Doctor – I’m going to get in trouble for saying this – I’d happily do a film with him,” Barrowman told RTE.

While such a movie will probably never happen, it’s interesting to note that Barrowman would apparently rather appear alongside Tennant (with whom he has appeared numerous times) than Matt Smith, who has held the role for two years now.

If we are going to see Captain Jack back on Doctor Who, it’s most likely that he would be back for the show’s fiftieth anniversary special, which will be airing sometime in 2013. Rumored to be making a reappearance in Tenth Doctor David Tennant, though showrunner Steven Moffat is notorious for keeping such surprises very secret.

What do you think? Would you like to see a movie with Barrowman and Tennant, or would you rather see Barrowman appear alongside Smith in the future?