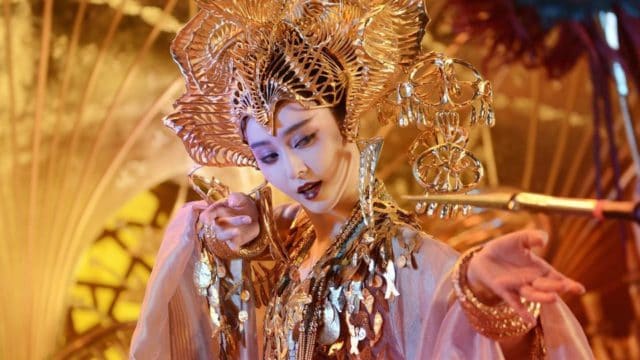 The initial trailer for Jet Li’s movie “League of Gods” is bizarre.Â  It’s that simple.Â  First impression? It looks like a mashup between Dungeons and Dragons, Crouching Tiger Hidden Dragon, and World of Warcraft.Â  Seriously, there is a LOT going on in this trailer, and what is with the strange little baby character? If not for the effects it might have been deal breaker just watching it any further than that point. I suppose the walking, talking baby might lend some comedy to the film, but it seems like more of a distraction rather than a real plot device. Of course this is speaking from just watching the trailer but it seems a lot more out there than any other Jet Li movie that’s ever been made.

It says a bit about why we haven’t seen a lot of him lately.

He’s obviously dipping into a different genre these days.

For a while Jet Li was all about action and revenge stories. Romeo Must Die, Cradle 2 the Grave, Hero, and few others. But then he started getting into a more reflective phase with films like Fearless where vengeance gave way to loss, then redemption and eventually self-realization. Could it be possible he’s just having fun now? Maybe he’s done what he had to do to become established as a screen legend and now he’s decided to have a good time and just kick back with a good fantasy film. It’s an interesting thought really, especially since this film seems to be all about special effects and otherworldly matters. Before he became known in America he was after all a huge action star and had accomplished a great deal in the realm of cinema. Maybe this is just another transition into something else.

It looks like he’s slipping into the wizened old man/mentor role.

Just from looking at the trailer it would seem that he’s less of a combatant and more of a wise old man in this film. It could be that he’ll engage the enemy in a more direct manner at some point, but without watching it yet that could be disproved very quickly. Right now it appears more that he will be set in a role that is more advisory than anything. That too would aid in the theory that he is in transition from one role to another in life. He used to be the main fighter, the one that would walk into the room and immediately handle any problem that needed handling. Rarely was Jet Li ever taken down in a fight, though he was frequently injured. His characters were just too tough to go down easily or at all. In Lethal Weapon 4 Murtaugh and Riggs had to double team him and they still got their butts kicked. I get the feeling that if he fights at all in this film it will not be much.

This definitely looks like an odd movie, but the special effects alone seem to warrant giving it at least a look.